Whether you learned from panels, workshops, booth events, press releases or whispered gossip there was a lot of education and information going on at this year’s BEA event. 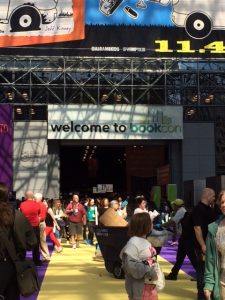 Advanced Facebook Marketing for Authors & Publishing Professionals was a talk given by industry professional Cindy Ratzlaff.  Given the day Facebook launched new changes to business and fan pages on its site, the talk was well attended and the information timely.  Ratzlaff told attendees that Facebook may ask you if you’d like to change the status of your business or fan page to a “Community” page and highly recommended that authors to NOT change to a community page. 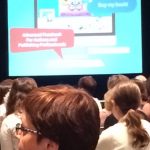 Ms. Ratzlaff provided several slides giving detailed information regarding Facebook, it’s changes, ads, and suggestions.  She has made the slides available HERE.  She gives several suggested apps including Woobox.com which can help randomly choose a winner for those doing giveaways on Facebook.

Another highly attended panel was Discoverability: How to Target New Digital Audiences which was moderated by Katie Donelan of Bookbub with panelists made up of Laura Dail of the Laura Dail Literary Agency, Liz Pelletier, Publisher and Co-Founder of Entangled, Matt Schwartz, VP Director of Digital Strategy and Marketing for Random House and  Nathan Henrion, Director of Digital Sales for Baker Publishing Group. 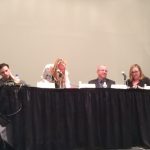 Pelletier spoke of their outreach to key influencers and several of the panelists talked about using BookBub and Fancore.  Matt Schwartz talked about the importance of matching a book to the right platform and Henrion spoke of the advantages of analytics to help guide them in the direction of what’s working for a book campaign.

Laura Dail mentioned the use of video becoming more and more important to outreach, something Facebook expert Cindy Ratzlaff also suggested.  Ruth Chamblee of National Geographic used an example of how video helped make their book campaign successful as she showed slides with examples at the Effective Book Marketing Strategies When Authors are Inaccessible panel the previous day.

The panel all agreed on the importance of getting book reviews.  Pelletier suggested that there’s a formula associated with the number of reviews you get, saying 10% of sales can be attributed to those reviews.

The panel wrapped up saying that two things are major contributors to reader outreach and discoverability; inspiring reviews and word-of-mouth.

Quick pieces of news shared during the event included:

*  Older Dr. Seuss stories, never published in book form, will be making it to the shelves via a book entitled Horton and the Kwuggerbug.

And whispers during the event have gossiped that publisher Samhain may be sold to a major publishing company in the months to come.

The 2014 BEA event is a great success on many levels and those industry professionals attending have been subject to opportunities in education, ideas and new products and services.  BEA 2015 is already on the minds of forward thinkers in the industry.

Love and Revenge in the Age of Piracy with Author Mack Little Mack Little grew up in the Deep South and has accumulated a vibrant...