Readers Entertainment
26 June 2014
Finalist – 2014 International Thriller Writers Awards – Best First Novel
Named one of the BEST BOOKS of 2013 by Suspense Magazine!
Author, J.J. Hensley is a former police officer and former Special Agent with the U.S. Secret Service so it’s not surprising that he knows how to weave a tale from start to finish that’s packed with realism and sure to give readers the chills.  His new novel, Resolve, is an old-fashioned murder mystery guaranteed to leave readers on the edge of their seats and wanting more! 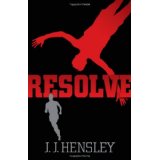 In the Pittsburgh Marathon, 18,000 people from all over the world will participate. Over 9,500 will run the half marathon, 4,000 will run in relays while others plan to run brief stretches. 4,500 people will attempt to cover the full 26.2 miles. Over 200 of the participants will quit, realizing it just wasn’t their day. More than 100 will get injured and require medical treatment and one man is going to be murdered.

When Dr. Cyprus Keller lines up to start the race, he knows who is going to die for one simple reason. He’s going to kill them.

As a professor of Criminology at Three Rivers University, and a former police officer, Dr. Cyprus Keller is an expert in criminal behavior and victimology. However, when one of his female students is murdered and his graduate assistant attempts to kill him, Keller finds himself frantically swinging back and forth between being a suspect and a victim. When the police assign a motive to the crimes that Keller knows cannot be true, he begins to ask questions that somebody out there does not want answered.

In the course of 26.2 miles, Keller recounts how he found himself encircled by a series of killings that have shocked the city, while literally pursuing his prey – the man who was behind it all.

Click on the image to listen to the podcast.