Zev is an elite hunter, fierce and lethal. But when Branislava wakens him in a warrior’s cave where he was put for his own protection, Zev feels a new awakening in more ways than he could have ever imagined. Vampires and rogue Lycans are not all Zev and Branaslava will have to fight if they are to survive. A mysterious evil lurks nearby. One that not even the Carpathians can see coming. One that may cost them all dearly. Find out more at http://www.ChristineFeehan.com. 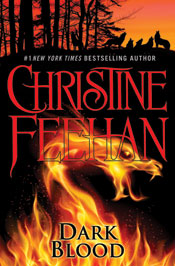 #1 New York Times bestselling author Christine Feehan has over 40 novels published, including four series.  Each of her four series has hit #1 on the NY Times. Her debut novel Dark Prince received 3 of the 9 Paranormal Excellence Awards in Romantic Literature for 1999. Since then she has been published by Leisure Books, Pocket Books, and currently is writing for Berkley/Jove. She also has earned 7 more PEARL awards.

She is pleased to have made numerous bestseller lists including the New York Times, Publishers Weekly, USA Today, Bookscan, B. Daltons, Amazon, Barnes and Nobles, Waldenbooks, Ingrams, Borders,Rhapsody Book Club, Washington Post, and Walmart. She has received numerous honors throughout her career including being a nominee for the RWA’s RITA.  She has received a Career Achievement Award from Romantic Times and the Borders 2008 Lifetime Achievement Award.

She has been published in multiple languages and in many formats, including large print, palm pilot, e-book, and hardcover.  In October of 2007 her first manga comic, Dark Hunger was released in stores.  This was the first ever manga comic released by Berkley Publishing and it made #11 on Publisher’s Weekly Bestseller’s List. Her ground-breaking book trailer commercials have been shown on TV and in the movie theaters. She has been featured on local TV, appeared on the The Montel Williams Show, and her book Dark Legend was featured on the cover of Romantic Times Magazine.