The Truth is Out There…And It is Coming to Find You. 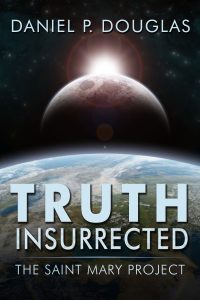 William Harrison, a former FBI agent injured in the line of duty, knows little more than boredom at present. Working as a private investigator specializing in extra-marital affairs, he experiences tedium in his line of work from one day to the next, a far cry from the excitement he once knew as an agent. But all of that changes when he begins receiving postcards from a mysterious informant whose signature is the enigmatic Echo Tango (Get it?…ET). Through the information received by Echo Tango, Harrison is drawn into an unbelievable reality of decades-long government cover ups and the existence of the Saint Mary Project. It is a conspiracy of awesome proportions, and Harrison is now designated as the man to stop a project specializing in extraterrestrial contact from getting out of hand as members of the ultra-secret program work to tie up loose ends. Harrison is sure that he is the right person for this task, but he never would have guessed that it would lead to the discovery of an incredible secret about his own family, which may prove the key to putting a stop to potential disaster. Can an ex-FBI agent help to uncover the truth behind UFOs? Found out whether there will be Truth Insurrected: The Saint Mary Project.
This title is the surprisingly well-crafted and exciting debut novel from author Daniel P. Douglas, a veteran of the armed forces, a long-time civil servant, and traveler with an apparently keen interest in extraterrestrials and their technology. The book takes Area 51 style conspiracy and places in the present, where the protagonist of Douglas must work with the aid of his colleagues to stop “unimaginable crimes.” For a first effort in any genre, the work proves impressive.
Truth Insurrected: The Saint Mary Project will keep any fan of science fiction and conspiracy style fiction turning the pages. The book is out now, and if you happen to be impressed with Douglas’ first novel, then fear not, for other novels are in the works. For more information about this new release and the author, check out the following website: http://danielpdouglas.com/.