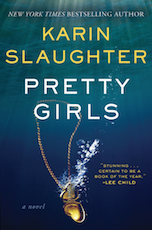 Women love crime fiction. This should be no surprise, given that one of the world’s most famous writers in the genre is Agatha Christie. Grisly, haunting, and downright disturbing tales of murder can be found on the bookshelves of women around the world. And yet, author Karin Slaughter still finds that interviewers wonder “why” she’s so interested in writing about darker material. The oft-unsaid implication is that she’d be happier serving up tales that won’t provoke nightmares. Slaughter, author of Pretty Girls and a dozen other bestsellers, has a thing or two to say to those who think women should lighten up their crime writing.

When people say my writing is dark, I’m always reminded of a passage from one of my favorite classics, written in the late 30s, the so-called golden age of detective fiction. To set up the scene: Rex, our tall, dark and handsome hero, is at home when he hears a noise downstairs in the dining room. There have been reports of a brutal rapist in the area, and Rex’s wife, who gave birth days before, is asleep. Rex grabs his gun, runs down the stairs and is confronted by an armed stranger—the rapist; he recognizes him from police sketches. They both point their weapons at each other and—

Rex pulled the trigger… the explosion filled his ears and acrid smoke stung his nostrils… The man fell backwards onto the floor… Hardly aware that he was moving, Rex ran down the stairs and stood over him, gazing down into what was left of [the man’s] face… Two streams of blood crept across the shining floor, one from his face and one from the back of his head… Rex could have ground his heel into the gaping wound which had been his nose and taken sweet pleasure in the feel of the warm blood.

Okay, so, I changed something. See if you recognize which book this scene is from now:

Scarlett pulled the trigger… the explosion filled her ears and acrid smoke stung her nostrils… The man fell backwards onto the floor… Hardly aware that she was moving, Scarlett ran down the stairs and stood over him, gazing down into what was left of [the man’s] face… Two streams of blood crept across the shining floor, one from his face and one from the back of his head… Scarlett could have ground her heel into the gaping wound which had been his nose and taken sweet pleasure in the feel of the warm blood.

Obviously, this is a passage from Gone With the Wind, where Scarlett kills a Yankee soldier who is there to rape and rob her and Melanie. Why does the emotional impact of this passage change when a woman pulls the trigger? Why does it feel darker when we know a woman’s mind conjured these images?

From the beginning of my career, interviewers have asked me why I am interested in writing so honestly about bad acts. I always point out that the vast majority of thriller and mystery readers are women—if we are interested in reading about these topics, why does it seem implausible that we are interested in writing about them? To many, this isn’t a satisfactory answer. There are still so many people who hold onto the institutional belief that only men can (should?) write about dark or violent topics, and that women are doing it to make a statement or get attention. It can’t be because we are good at it, or because these are the books we want to write. It can’t be because we are interested in exploring the darker, gray areas of life.

And yet the perception of sugar and spice persists. Very recently, I had a conversation with an old-school critic who told me without any hesitation that he doesn’t have time for women authors because women in my genre do not write as well as men. I have lost count of the number of readers and reviewers who, over the last decade and a half, have told me that they enjoy my books because I “write like a man.” I am not the only female writer I know who has received this compliment (sometimes in print). The message seems clear: man = strong / woman = weak.

Obviously, I’ve given a lot of thought as to why women who write realistic stories are called “dark” while men who do the same are called “tough” and “gritty” and (my favorite) “powerful.” Why is it so shocking when Kathy Reichsspeaks to her experience as a forensic anthropologist? Or Gillian Flynn speaks to the violence that can lurk inside a marriage? Maybe an insider’s perspective is what gives female authors’ books this so-called darker edge. We write about these crimes as an exorcism. We write about them because they could happen to our mothers, our sisters, ourselves. Does that mean our work is any darker than our male counterparts, or does it just feel darker because we tend to write from a female protagonist’s point of view? I’ll let you know after I read the latest Lisbeth Salander novel, written by David Lagercrantz. I hear it’s great. He writes like a woman.

Karin Slaughter is the #1 internationally bestselling author of more than a dozen novels, including the Will Trent andGrant County series and the instant New York Times bestseller Cop Town. There are more than 30 million copies of her books in print around the world.