The last several years Book Expo America (BEA), the publishing industry’s largest convention, has been held in New York at the Javitz Center. But, in 2016 it was determined that BEA would be held in the American heartland at McCormick Place in Chicago, IL. A decision that didn’t sit well for some and that thrilled others.

Many would say that New York publishers have had blinders on when it comes to anything outside of the city. Historically reluctant to embrace change, the big publishers have come late to the party on everything from audio books to ebooks and self-publishing. Getting those giants of industry to move forward outside of their comfort zone has nearly been the death of them. So, you would think that reaching beyond the boundaries of the New York City would be welcome. Moving outside their immediate sphere of influence and having a chance to meet new attendees, of which there were more than 1000 from the Midwest with a 10% increase of VIP attendees, should have been exciting and a reason to invest in bigger booths and a greater presence. Instead, the booths were noticeably smaller for some publishers.

It’s understandable that the cost to fly out representatives of the publisher, booths, giveaways and of course the time given to such an event when no one was sure how the change of venue would affect the number of attendees would be of concern to an industry that struggles financially and has for the last few years. So, it could be argued that it was prudent for the struggling giants to play it safe and keep things small. 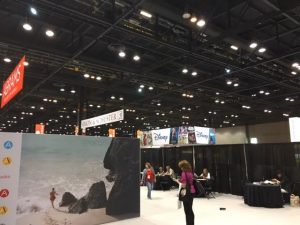 It doesn’t help that Reed, who runs the convention, offered little incentive by way of discounts on the booths. As a matter of fact, the convention costs continue to rise regardless of how the industry is doing, so Reed seems unsure of how to survive in a struggling time, in a struggling industry. Where Reed could have filled space with small press and independent publishers it seemed accepting of the 20% decrease exhibition space this year due to the move.

Reed’s show runner, Brien McDonald acknowledged that they knew the show would be smaller, but felt the trade-off of having NEW attendees was worth that cost. And, the idea behind reaching out to new attendees, new booksellers, is great, but reaching the new, smaller audience, could have been offset with discounts and incentives to those wanting a presence at the event. 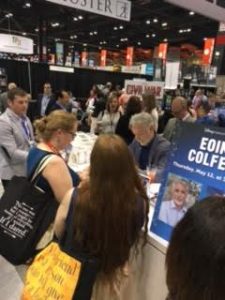 “Six or seven years ago we participated in BEA leaving our DVDs at registration, which cost us $500. It was very reasonable and we got a great return on our investment. But, then the event got new management and what once cost us $500 went up to $2500 in order to do the same exact thing,” says Sheila English of COS Productions. “Our DVDs were normally gone before the end of the event and, based on follow up contacts, well received by attendees. It was beneficial for everyone, so a good investment.”

Attendees this year remarked on the lack of celebrities this year and wondered if it had to do with location or lack of sponsorship to bring them. 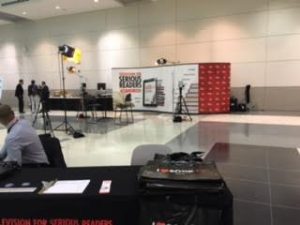 The PW Show Daily highlighted this issue with remarks from many attendees offering the overall idea that publishing has grown outside of New York and is now everywhere, and the need to have a presence outside the island of Manhattan seems to only be new to publishers in Manhattan. Of course publishers from New York may have loved the event in the end, the jury is out, or at least unknown at this time.

Virgin River by Robyn Carr My rating: 4 of 5 stars This is such a great story. I loved every bit of it, especially the setting....
Read more