Behind the Words: Author Kathy Lyons 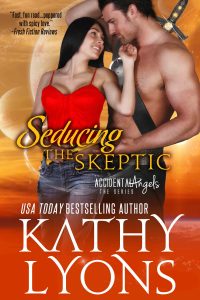 This week Behind the Words welcomes author Kathy Lyons. Hey Kathy, we’re glad to have you here today. Tell us a bit about yourself. Where you’re from, where you live? Do you have one of those day-jobs?

I live in central Illinois where the skyline is cow, corn, University of Illinois, soybeans, corn. But it’s home and so I love it. I write full time in a chair with a cat on my lap. Cinnamon fights constantly with my keyboard and sometimes she wins. Because we

all love kitty pictures, here she is after winning. The keyboard is hidden underneath her and I’ve decided to read instead of write.

My writing day involves coffee, a green smoothie because I’m trying to stay healthy, a cookie because I usually fail at being healthy, and then I write. I can’t stop working until 2000 new words appear. I usually give myself weekends off, so that’s 10k a week. Not so easy sometimes. But on the upside, if I get it done early, I go rollerblading or play a lot of racquetball! (I do not mention housework because that’s never a good reward.)

I needed a break from historicals, so I wrote a book just for fun. A woman walks through her roommate’s closet (yes I’m a Narnia super-fan) to rescue a handsome prince from demented birds. Then she has to try and get home while fighting her attraction to the hot, hot guy in a world of magic…who suddenly has a shuttlecraft. What? Yup, there’s a full history behind the world, but our heroine learns about it piecemeal while falling in love. And then, she gets to go back home, but what will she do about the evil mage terrorizing the land? Truly, the whole adventure was fun, fun, fun plus I got to make Star Wars, Star Trek, and Firefly jokes. Check it out! Seducing the Skeptic by Kathy Lyons http://jadeleeauthor.com/project/seducing-the-skeptic/

My favorite joke in the whole book comes from the hero’s stone of destiny. It really needs to be printed with all caps while a deep, reverberating voice says it aloud. STONE OF DESTINY-Y-Y-Y  Intriguing right? Well, the heroine figures out what it REALLY is and that has me laughing every time I think of it. But I can’t tell you without spoiling the back third of the book!

I’m deep into my third Grizzly Shifter book. Yup! Grand Central Publishing asked me to write a sexy grizzly bear shifter series, and it’s been so much fun! Since there’s adventure in the series, we decided to do funny takes on Bond films. So the titles are: The Bear Who Loved Me, License to Shift, and For the Bear’s Eyes Only all by Kathy Lyons. How cute is that? The first book will be out in September 2017, and I’m so excited I could bust. I get to be funny, tender, and tear things apart with my bare claws! Here’s the amazon link for the pre-order.

Well, I’ve just started telling people that I’m a shaman. Yup. I’ve been an energy healer for decades, but recently I was meditating when suddenly I was surrounded by Shamans. They welcomed me to their ranks, gave me gifts, and then I sat on the couch for five more hours in a state of such bliss, I haven’t fully recovered (not that I truly want to). Turns out shamans throughout the ages are trained pretty much how I was: through practice, some mentorship, and daily exploration into my abilities. And now that I’ve been inducted, so to speak, my healing abilities have taken a great leap forward.

Soy latte. If the world is REALLY crazy (often) then I’ll add chocolate or caramel to it. Or both!

A sneak peek at Seducing the Skeptic:

Desperate to save her fellowship, theoretical physicist Janet Mason has 48 hours to build a better thesis when she tumbles into a strange fantasy world with demented birds, farmers shaped like frogs, and one hot, frustrating prince.

Cornered by angry beasts, Prince Keeven is moments away from death when Janet’s sudden appearance creates a much-needed distraction. Finally, the gods have smiled upon his quest and sent an angel to fight by his side.

Janet is convinced she’s gone insane. But the more time she spends fighting evil with the fascinating Prince, the faster she falls in love with madness.

Then Janet finds a way back, just as Keeven faces his worst enemy. They have one chance to save both worlds, but only if they sacrifice everything they’ve ever wanted.

You can purchase Seducing the Skeptic at:
Amazon

You can read an excerpt by following this link.