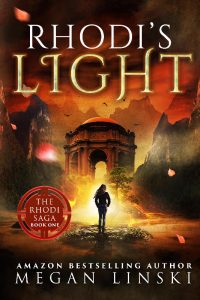 Hey there! Remy Injay, indie book reporter, here for another interview! I’m here with Talidin, Rhodi master and one of the leading (and in my opinion, amazingly sexy) leading characters in The Rhodi Saga by Megan Linski! Thanks for agreeing to do this, Talidin.

I didn’t agree to do anything. I’ve gotta give credit for the author dragging me out here and inserting me into this strange world. But I guess with all that’s happened lately, I owe the author one. Or maybe I don’t, since she’s the one who CAUSED ALL MY PROBLEMS IN THE FIRST PLACE.

First of all, it’s Row-DEE, not Row-DIE. Geez, make things even darker then they already are, why don’t you? …Although Rachel, our worst enemy, probably likes the other pronunciation better…

ANYWAY, a Rhodi is a warrior, sworn to protect the people. We’re the last leg of an extinct group of warriors trying to stop the Red Huntress (that’s Rachel) and her team of soldiers from taking over our homeland, Crescentia. And let me tell you, it’s not easy. I became a master over fifteen years ago, and it only gets harder with time. Being kidnapped, dealing with murder, solving mysteries, they’re all part of the job…but I’m telling you too much already.

Crescentia is a lot like your world, but it’s also a lot different. It’s a dystopian, futuristic world, with the decor based on ancient China, Greece, Ireland, and other places. Everything’s modern, in Crescentia. We have cars and TV and electricity and things, but we don’t have those weapons you guys call guns. We fight with swords, spears and magical powers.

It’s somewhat like modern-medieval, with Rhodi being inspired by martial arts and Japanese samurai, respectively. Each State in Crescentia is its own little world, kind of like its own country. Areos, my home, is the equivalency of your Greece. The great thing about Crescentia is it’s all one big melting pot.

Read the book. It gets even worse. The wonderful thing about my world is that it’s so colorful and there’s so much going on. All cultures and races are respected…but they won’t be, if Rachel gets her way.

We heard you’re here to take the main character’s place, your student, Dylan?

Dylan was nervous about coming on here, so I subbed in for her. She’s a fiery, fiesty girl, but she often feels the need to over perform and make everybody happy. She’s going through a lot right now, so I’m leaving her back home to train while I satisfy my author’s irritating nagging by talking to all of you.

She’s a pain in the ass, but she’s my pain in the ass. Dylan’s my student, and I feel the need to protect her. Of course she’s always questioning me on everything, and she never listens, but what’s the fun of being a Rhodi master if it isn’t challenging, right? She keeps me on my toes. I never know what she’s going to do next.

What do you want readers to know about your story?

I’m not gonna lie, the Rhodi Saga takes you for a real rollercoaster. We confront real issues in our little fantasy world, but once you read it you become a Rhodi and you’re part of us. We’re a family and we’re all going to get through it together. Once a Rhodi, always a Rhodi.

Is this an interview, or an interrogation? Oh, I’m just teasing you. I would say read the Rhodi series or something like that, but that just sounds asinine, doesn’t it, especially when it’s MY problems being exposed to the world. *glares at author* I’d say give it a chance, if anything. I’m not THAT intolerable, after all.

About the Author:
Megan Linski 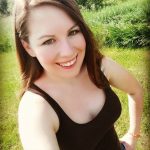 is the owner of Gryfyn Publishing and has had a passion for writing ever since she completed her first (short) novel at the age of 6. Her specializations are romance, fantasy, and contemporary fiction for people aged 14-24. When not writing she enjoys ice skating, horse riding, theatre, archery, fishing, and being outdoors. She is a passionate advocate for mental health awareness and suicide prevention, and is an active fighter against common variable immune deficiency disorder. She lives in Michigan.

You can find her at www.meganlinski.com.

Megan Linski also writes under the pen name of Natalie Erin for the Creatures of the Lands Series, co-authored with Krisen Lison.

BEHIND THE WORDS WITH MATTHEW FITZSIMMONS

Welcome Matthew, and welcome to the blog. Let's begin with telling our readers where you’re from, where you live, and is writing your full-time...