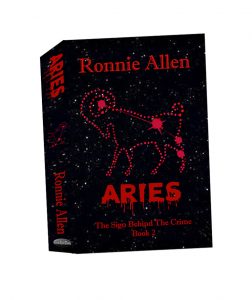 Today, we welcome thriller author Ronnie Allen to the blog. Welcome Ronnie. Tell us the synopsis of your book. Aries: The Sign Behind The Crime, Book 2.

A fashion industry icon murdered in Chelsea Park—the first out of five planned. Unbeknownst to the killer, a rookie detective who’s out to make a name for herself in Manhattan-Midtown South discovers the body. An avid student of forensic sciences, Detective Samantha Wright relays her analysis of the crime scene to her new partner, Nick Valattuti, and the lead homicide detective, Dingo Withers who’d become Sam’s nemesis and for good reason.

Forensic Psychiatrist Dr. Frank Khaos comes in to make the family notification and profile the case. He, too, is in conflict with Detective Withers going back some years. With Frank not being thrilled with Sam’s spontaneity, and she not enamored with his tough persona their working relationship is off to a rocky start. It’s Sam’s uncanny ability for spot-on analysis that turns Frank’s opinions about her around for purely selfish reasons. Maybe, just maybe, she can resolve the incident that’s been tormenting his soul for over two years.

In an interview at the precinct with members of the decedent’s family, Dr. Khaos discovers something very wrong with the health of one of the daughters. He hospitalizes her. In further interviews with the family, another murder occurs, and then others. So does that rule out the family as suspects?

Aries will take you on a wild ride through the five boroughs of NYC. The serial murder case collides with drug and weapons traffickers in Staten Island, along with the cold case murder of Frank’s wife. Sam and Frank’s lives are threatened, hits on them attempted, as Sam in her journey to prove herself worthy of being a detective surpasses everyone’s expectations, including the staunch FBI and combative DEA.

What happens between Sam and Frank?

Well, let’s just say that after a lead draws them to a Manhattan club and they observe a scene, not only does the serial murder case move forward, their relationship takes a turn toward hot. Even after Sam solves both cases, conflicts remain in their personal lives so Aries ends Happy for Now.

A few things. Interestingly, I started plotting Aries before I received my contract on Gemini. Because of that, I didn’t want to continue with the same characters. I was about six months into the planning when I received the contract from Black Opal Books. I loved the new characters so much I decided to go with them. My tag line was, The Mind Behind the Crime since I write psychological thrillers. I am a plotter, but I do allow my characters to evolve on their own, and the Aries elements flowed out. I got that ah ha moment for The Sign Behind The Crime for the series. Gemini was in edits. I contacted my publisher who loved the concept and we decided to run with it.

What’s unique about my books is that the astrology is weaved through them. The symbolism behind the Sign is what gives clues to solve the crime. I’m not an astrologer and I do not get into charts. My books are fiction, and ‘no,’ you don’t have to be born under the sign to read the book. Yes, I have gotten that question at book signings.

What’s unique about this particular story is that I delve into the antagonists’ minds, psyche, ‘why’s more than most other thriller authors. So, I go beyond the parameters of the genre and I’m so grateful to my publisher to be so open in allowing me to push the envelope. In Aries, one woman orchestrates the murders while her three beholden carry out the deeds. They have their own stories that push the plot. There are two protagonists, who own the story, Detective Samantha Wright, and Dr. Frank Khaos, and they each have their own internal and external motivations and conflicts that come together.

Tell us about your main characters.

Rookie Detective Samantha Wright was a teacher in the NYC Department of Education before she entered the NYPD in Juvenile Crimes. After some major cases under her belt, she qualified for promotion to detective. She’s sassy, smart, and ‘what’s on her mind is on her tongue,’ especially with her crime scene analysis. Though she’s spot-on, she’s first coming to terms with her intuitive abilities and doubts messages sent from Dara, her Spirit Guide. She’s the opposite in persona from Dr. Frank Khaos, being conservative and corporate in her attire, while he’s ‘rough around the edges’ in T-shirts and skinny jeans. Dr. Khaos is former Special Forces and had four tours in Iraq. He’s a third degree Black Belt in Brazilian Jiu-jitsu, and rehabilitates NYC gang members wanting to leave the hood. His MMA training gym in Harlem also houses his ‘secret place.’ A widower with a seven-year-old son, Frank has turned inward, and refuses any relationship until his wife’s murder is solved.  Sam and Frank are also opposites in their up bringing. She’s from an intact family with helicopter parents, both being medical doctors. Frank, given up at birth bounced around in the foster care system because of his troublesome behavior until his adoption at age ten.

Aries is a romantic thriller, on the dark side. By dark, I mean the aspects of the paranormal that delve into black magick, but that doesn’t rule the plot. Readers, who like longer books with multi-layered plots and characters set in cosmopolitan locations, present day police procedurals, with steamy romantic content on the page, will enjoy the book most. The Aries reader is one who is open-minded about the spiritual connections in life, fate, and becomes turned on by the energy of a big city. The Aries reader would not be offended by aggressive language or obscenities because that’s the way many of the characters talk. Aries is not for the weak-kneed or faint-of-heart.

Have you received any feedback on it yet, and if so what was it?

Yes, there are very positive reviews on Amazon and Goodreads. The common threads in the reviews are, ‘I was hooked from the first page to the last.’ ‘I couldn’t put the book down.’ ‘The sex is hot!’ ‘Allen is a top notch story-teller, and the book is a page turner.’

This is a toughie because what I want readers to know about me, I’ve said in one social media platform or another. But there is something that my friends know that readers may not. I miss NYC on so many levels. I’m living in rural central Florida for over nine years. Though I’ve made wonderful friends and have a fabulous writer’s chapter, I miss a lot. Restaurants, shopping, and business energy tops the list. That’s probably why NYC is my setting for my books. Not only was I born and raised there, and I lived in Brooklyn for sixty years, I’m more familiar with The City than any other location.  I’m also bringing myself back there through my characters. In Gemini, the first book, I do have parts of the book that take place here in Florida where I live, but I fictionalized the county. Readers in my county loved that part in Gemini and wanted more to take place here. Scorpio, which is being released in October, is NYC based, but I promised my community readers that in Libra, which I’m writing now, there will be scenes down here. I’m getting close to writing that subplot.

I’m eagerly awaiting my edits on Scorpio, preparing for an October release. Libra, at 85K words at this writing will be coming in at 120K, like the first three books. When I’m done with the first draft, I’ll run another poll through my social media asking readers what they’d like the fifth book to be titled. Whichever Sign has the most votes, will be it. Libra won the contest last year. I’m thinking for the fifth book of bringing in new characters set in a different location.

Another goal of mine is to put out feelers to TV producers for a series on a cable network. I see Gemini as the first season, or a series in itself. It’s Psych meets House. I have a background in screenwriting and film from the late ’70s -early ’90s, and I write with a cinematic feel. Readers had written in reviews that my books would work at a feature film. I’m glad they saw my vision. 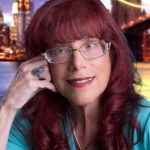 My books are on Amazon, Barnes and Noble, Kobo, and at my publisher, Black Opal Books. Search for: Ronnie Allen, The Sign Behind The Crime.

Thank you so much Ronnie for joining us today!