What Lies in the Shadows? RE Talks to Bestselling Author Christine Feehan About Shadow Keeper

With Shadow Keeper coming out May 29th we thought we’d catch up with International and New York Times bestselling author Christine Feehan about her third installment in the popular Shadow Rider series. 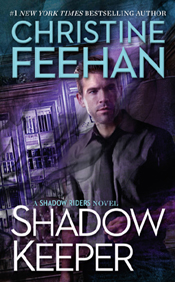 For those who’ve not heard of the series, it’s paranormal romance.  The Ferraro family are wealthy and famous, though many speculate they are associated with the mafia that’s not true.  They are trained assassins who can transport themselves using shadows in order to deliver justice to those who have somehow gotten away with a crime.

Shadow Keeper features Giovanni Ferraro who was injured in the last novel and who can’t “ride the shadows” because of hardware in his leg.  He meets Sasha, a girl from Wyoming who is independent and has little tolerance for BS, under unflattering circumstances and now must work doubly hard for her good opinion of him.  When a stalker goes after Sasha, becoming more and more dangerous, Giovanni turns to his family and his instincts to keep her safe.

Christine has had sixteen #1 New York Times bestselling books.  All of her series have reached the #1 position including her most recent release Judgment Road, from her newest series Torpedo Ink.

RE:  Christine, Shadow Keeper opens up with Giovanni Ferraro at his club doing his best to entertain himself with a game that ends up backfiring on him.  What purpose did the game serve in the story?

(Read the first chapter here to understand what the game is- https://www.christinefeehan.com/shadowseries/shadow_keeper.php#excerpt )

CF:  The “game” serves a few purposes.  First, he’s doing it to cheer up his cousin who was hurt by someone trying to use him.  In a broader sense I use it to show the dark underbelly of extreme wealth.  The Ferraros have to question who they can really trust and who is trying to take advantage of them, even when doing something as normal as dating.

RE:  Giovanni is a billionaire playboy and Sasha is from a ranch in Wyoming.  This seems an unlikely pairing. What makes this couple so perfect for each other when they have such a seemingly different background?

CF:  Even though they seem to come from entirely different worlds, there are still a great deal of fundamental things that are the same.  Important things like values, their sense of loyalty to family, self-sacrifice for those they love.  They actually have a great deal in common.  Then, of course there’s their physical attraction which both of them feel strongly.

RE:  Why do you say they “Ride” the shadows as opposed to just saying they “teleport”? What’s the difference?

CF:  It isn’t so simple as teleporting and I want people to understand that.  They feel the movement of the tubes they ride in.  It’s like a slide that pulls on the molecules of their bodies.

RE:  In your imagination, what’s it look and feel like to “ride the shadows”?

CF:  Their bodies feel as though they’re being pulled apart by the incredible rate of speed as they slide through these tubes that are connected with the shadows.  Some people born Shadow Riders can’t take it and never actually become a Rider.  The faster you go, the harder it is physically for them to ride.

RE:  What do you love most about Giovanni and Sasha’s relationship/love story?

(Watch the book trailer for more details about the overall story – https://youtu.be/RFSmYVb-bIM )

CF:  I love how they make each other better people.  Sasha brings out a sweetness in Giovanni and he learns to be more patient and giving with others because of her.  She sees things in him that no one else, not even his family, sees.  They do that for each other.

He takes some of her load off so she has time to breathe and enjoy life.  He makes her feel safe and important.  She gets to be taken care of.  He offers her his most precious gifts, his heart and his family.

RE:  With Shadow Rider, the first novel in the series, you spend time establishing the world of Shadow Riders, specifically the Ferraros, but you talk about cousins in other cities.  In Shadow Reaper, we learn more about how the Riders are trained and we get a hint of the darkness that follows some of that training.  How does Shadow Keeper further the mythology of the Riders? 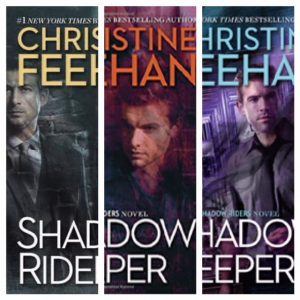 CF:  Shadow Keeper highlights two things specifically.  First, we get a real sense of how the family is there for each other.  How tight they are and how loyal to one another.  Second, I wanted to show that they don’t need the shadows to be heroes.  Giovanni can’t use the shadows, but it’s left to him to keep Sasha safe.  He hates that he doesn’t have that extra ability, but he’s still confident in himself and his ability to keep the woman he loves safe.

RE:  What’s next for you, both with the Shadow Rider series and for the rest of this year?

(Check out Christine’s Coming Soon page- https://www.christinefeehan.com/comingsoon/index.php)
CF:  I have a very full writing schedule this year.  I just finished Vengeance Road, which is Steele’s book.  I’m working on Toxic Game which is Draden and Shlyah’s book.  Next up will be Shadow Warrior. 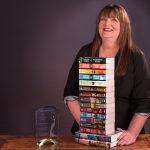 You can find out more about Christine Feehan at https://www.ChristineFeehan.com