From Author Andrew McCabe — THE THREAT: How the FBI Protects America in the Age of Terror and Trump 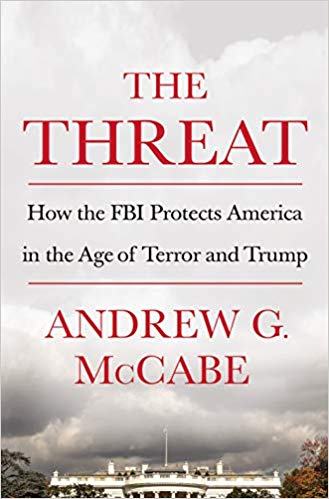 Andrew McCabe will publish a book entitled THE THREAT: How the FBI Protects America in the Age of Terror and Trump with St. Martin’s Press on December 4, 2018, it was announced today by Jennifer Enderlin, Executive Vice President and Publisher of St. Martin’s. North American publishing rights were acquired by St. Martin’s Press Vice President and Editor in Chief, George Witte, from literary agents David Granger and Todd Shuster of Aevitas Creative Management, who represent the author. The book will be available in hardcover, ebook, and audio formats.

On March 16, 2018, just 26 hours before his scheduled retirement from the organization he had served with distinction for nearly 22 years, and after sustained and unprecedented public attacks from the President of the United States, Andrew McCabe was fired from his position as Deputy Director of the FBI. Now in THE THREAT, McCabe will share a candid account of his career and an impassioned defense of the FBI’s agents, integrity, and independence in protecting America and upholding our Constitution.

“We are thrilled and honored to be publishing Andrew McCabe’s book — destined to be a seminal record of our times,” says Jennifer Enderlin. “THE THREAT will be candid, dramatic, and urgently newsworthy.”

McCabe’s career encompasses and reflects the modern history of the FBI, and its transformation from a corps of cops who investigated and prosecuted crime into an intelligence agency that prevents and deters attacks on American citizens. Starting in 1996 under Director Louis Freeh, McCabe worked in the FBI’s New York field office, where he investigated Russian organized crime. On September 11, 2001, he became one of many New York agents who spent months investigating the attack. Later, McCabe worked under Director Robert Mueller leading the FBI’s investigations of major cases including the Boston Marathon bombing, the Benghazi attack, and other terrorist incidents on US soil. He also built an interagency team to change the way the government conducted the interrogation of high value terrorists and helped identify and target ISIS and Al Qaeda networks and leaders.

In January 2016, Director James Comey appointed McCabe as Deputy Director, and the two worked closely on the controversial investigations of Hillary Clinton’s use of a private email server and Russia’s efforts to undermine the presidential election. After Comey’s firing as FBI director, McCabe became Acting Director of the agency. That job put him in the room with the President, and many other leaders at the highest levels of this administration. A series of troubling, contradictory, and often bizarre conversations with these figures led McCabe to a conclusion of vital interest to every American citizen: the actions of this President and his administration undermine the FBI and the entire intelligence community; they pose a clear and present danger to the country.

Andrew McCabe says, “I wrote this book because the president’s attacks on me symbolize his destructive effect on the country as a whole. He is undermining America’s safety and security, and eroding public confidence in its institutions. His attacks on the most crucial institutions of government, and on the professionals who serve within them, should make every American stand up and take notice.”

Author Andrew G. McCabe served as deputy director of the Federal Bureau of Investigation from February 2016 to January 2018. He began his career at the FBI in 1996, working first as a street agent on the Eurasian Organized Crime Task Force, and eventually as its supervisor. Later, he led the FBI’s Counterterrorism Division, the National Security Branch, and the Washington Field Office, and was the first director of the High-Value Detainee Interrogation Group, which developed new methods for lawfully and effectively questioning suspected terrorists. He lives in Virginia with his wife Jill, their two children and a dog.

Readers Entertainmenthttp://dayagency.com
Previous articleChristine Feehan Talks – “If I were to…“Game!
Next articleThere’s a Book for That: Yom Kippur