The CW has given the go ahead to a TV drama based on Tosca Lee’s bestselling book The Progeny, according to Deadline. The adaptation will be written by Chris Roberts, and produced by Edward Burns’ Marlboro Road Gang Productions, Radar Pictures and CBS TV Studios.

The novel centers on Emily Jacobs, “a woman with amnesia, who discovers she is actually a descendant of history’s greatest murderess, Elizabeth Bathory. The truth leads her on a journey into the dangerous underground of Europe, where she must confront three ancient orders with varying objectives.”

ABOUT THE PROGENY:
New York Times bestselling author Tosca Lee’s second novel in the House of Bathory duology, Firstborn (the sequel to Lee’s bestseller, The Progeny), has won Realm Makers 2018 Book of the Year. It also took home the supernatural category win.

The Progeny released May 2016 to outstanding reviews calling it “irresistible” (Publishers Weekly), “suspenseful” and “entertaining” (Booklist) with a jaw-dropping ending that had early readers clamoring for the sequel before The Progeny even released.

Called “The Queen of psychological twists” by New York Times and USA Today bestselling author Steena Holmes, Lee has previously been best known for her historical novels (including 2014 ECPA Fiction Book of the Year winner Iscariot and 2015 finalist The Legend of Sheba) and evocative prose. While Lee’s trademark research remains in evidence, the House of Bathory duology, with its high octane pacing, represents a new direction for the author—one enthusiastically embraced by readers and Hollywood, both. The books are currently in development as a dramatic television series by Radar Pictures and Ed Burns’ Marlboro Road Gang, as first reported by Deadline Hollywood: http://bit.ly/2wsinqY.

Filled with adrenaline, romance, and reversals, the duology is the story of Audra Ellison who, in a bid to protect a powerful secret, has elected to erase the last two years of her memory and start over until she’s found and forced to go on the run—a journey that takes her to the underground corridors of Europe she’s tried to leave in her past.

Realm Makers is an organization committed to fostering excellence in the speculative (sci-fi/fantasy) arts for authors, filmmakers, artists and artisans of faith. The annual conference was held this weekend at the Sheraton Westport Chalet in St. Louis, MO where it will be held again in 2019.

ABOUT THE AUTHOR:
Tosca Lee is the award-winning, New York Times, CBA, and IndieBound bestselling author of Iscariot, The Legend of Sheba, Demon: A Memoir; Havah: The Story of Eve; and Forbidden: The Books of Mortals series with New York Times bestselling author Ted Dekker. A lifelong world adventure traveler, Tosca lives with her husband and four children in Nebraska. Her upcoming pandemic thriller, The Line Between, releases January 2019. To learn more about Tosca, visit www.toscalee.com. 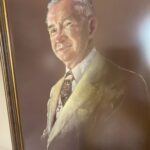 Jocie McKade - 24 June 2021 0
Special Feature Author's Celebrating Father's Following in my Father’s Footsteps by Barbara Hinske I grew up in a loving, middle class family. My parents adored each other...