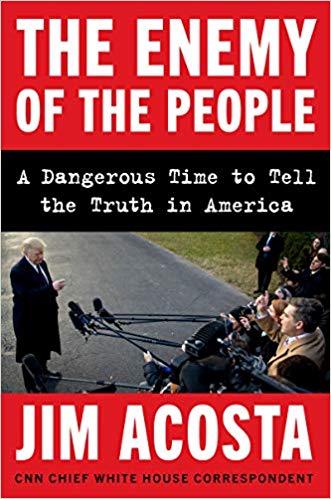 Harper, an imprint of HarperCollins Publishers announced today that it will publish THE ENEMY OF THE PEOPLE: A Dangerous Time to Tell the Truth in America by CNN’s Chief White House Correspondent Jim Acosta on June 11, 2019.   Acosta, the most visible member of the media branded an “enemy of the people” by President Trump, exposes the tumultuous and dangerous realities of the current White House and its war on truth and the first amendment.  The deal for world rights was negotiated between Lisa Sharkey, SVP and Director of Creative Development and Robert Barnett of Williams & Connolly LLP.  Executive Editor, Matt Harper, will edit the book.

Jonathan Burnham, President & Publisher of Harper, says, “Jim Acosta’s account of his experience as CNN’S Chief White House Correspondent takes the reader into the world of reporters who are seeking accuracy and openness in a time when the freedom of the press is under threat. As the target of persistent attacks from the Trump White House, his narrative is required reading.”

In THE ENEMY OF THE PEOPLE, Jim Acosta unveils the chaotic first two years of the Trump administration detailing, for the first time, his view from the frontlines of Trump’s relentless war on the media. Going inside the briefing room and onto Air Force One with the White House press corps, Acosta reveals the conversations, battles, and near-constant conflict that define life for a media working to hold the Trump administration accountable for its actions and its words.  He details never-before-revealed stories of this White House’s rejection of truth, while laying out the stakes for how Trump’s hostility toward facts poses an unprecedented threat to our democracy.  With fresh portraits of infamous administration officials such as Sarah Huckabee Sanders, Stephen Miller, and others, Acosta, a veteran of reporting on four administrations, presents a damning vision of bureaucratic dysfunction, deception, and danger, offering a fly on the wall view of the White House communications during one of the most dramatic and contentious, but consequential, times in the country’s history.

“Simply put, I am writing this book to share what I’ve experienced covering President Trump during his first two years in office,” says Acosta. “This sobering, bewildering, and sometimes frightening experience has made it absolutely clear that this is a dangerous time to tell the truth in America. The president and his team, not to mention some of his supporters, have attempted to silence the press in ways we have never seen before. As just about everybody has seen, I have witnessed this first hand. As difficult as that challenge may be for the free press in America, we must continue to do our jobs and report the news. The truth is worth the fight.”

Jim Acosta is CNN’s Chief White House Correspondent, currently covering the Trump administration.  He also previously covered the Obama administration from the White House and around the world.  He regularly covers presidential press conferences, visits by heads of states, and issues impacting the Executive Branch of the federal government.