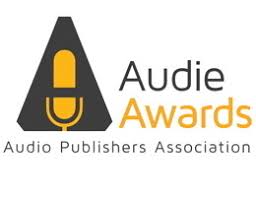 The Audie Awards were created to recognize excellence in audiobooks and spoken word entertainment.  These finalists showcase some of the best in audio books for 2019.

AUDIOBOOK OF THE YEAR

An American Marriage by Tayari Jones, narrated by Eisa Davis and Sean Crisden, published by HighBridge Audio, a division of Recorded Books

Beastie Boys Book by Michael Diamond and Adam Horovitz, narrated by the authors and a full cast, published by Penguin Random House Audio

Children of Blood and Bone by Tomi Adeyemi, narrated by Bahni Turpin, published by Macmillan Audio

I’ll Be Gone in the Dark by Michelle McNamara, narrated by Gabra Zackman, Gillian Flynn, and Patton Oswalt, published by HarperAudio

Failing Up: How to Take Risks, Aim Higher, and Never Stop Learning, written and narrated by Leslie Odom, Jr., published by Audible Studios

In Pieces, written and narrated by Sally Field, published by Hachette Audio

Steal the Stars by Mac Rogers, narrated by a full cast, published by Macmillan Audio