AFTER LIFE: MY JOURNEY FROM INCARCERATION TO FREEDOM BY ALICE MARIE JOHNSON 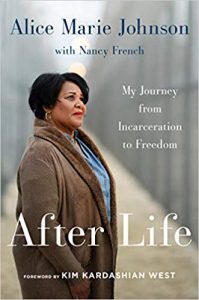 MAJOR FILM AND TELEVISION DEAL WITH ONE COMMUNITY AND ENDEAVOR CONTENT

Harper, an imprint of HarperCollins Publishers, announced it will publish AFTER LIFE: MY JOURNEY FROM INCARCERATION TO FREEDOM by Alice Marie Johnson with foreword by Kim Kardashian West on May 21, 2019.  The deal for North American rights was negotiated between Lisa Sharkey, SVP and Director of Creative Development, HarperCollins Publishers, and Mel Berger of WME.  Executive Editor, Matt Harper, will edit the book. In addition, life rights and film/television rights were sold to Endeavor Content and One Community, with Scott Budnick and Zola Mashariki overseeing the adaptation.

Kim Kardashian West says, “My life has forever changed because of Alice Marie Johnson.  Her story is a gift that will now reach so many millions more through her book and film. I hope Alice’s case is just the beginning of a movement to help those left behind.  I am invested in continuing to support Alice and this cause.”

Alice Marie Johnson is a woman who was serving a life sentence for non-violent drug trafficking until President Donald Trump commuted her sentence at the urging of Kim Kardashian West. Convicted in 1996 for her nonviolent involvement in a Memphis cocaine trafficking organization, she was sentenced to life behind bars. Imprisoned in the aftermath of former President Clinton’s crime reform bill, Johnson was one of many black women and men to receive long prison terms for nonviolent, drug-related crimes.

A woman with no criminal record before her arrest, she had been manager at FedEx, a loving wife, a mother coping with her youngest son’s tragic death, until the loss of her job, marriage, and son led her to desperation. In June 2018, President Donald Trump commuted Johnson’s sentence at the behest of Kim Kardashian West.

“It is an honor and a privilege to publish After Life.” states Lisa Sharkey, “Alice Marie Johnson takes readers inside her incredible journey and how she, a non-violent offender in her first offense, wound up serving a life sentence. Her story reveals what life was really like for this model prisoner, how hard she worked for her freedom, and the incredible series of events that eventually led to her release after 21 years behind bars.”

In this honest, faith-driven memoir, Johnson tells how she held onto hope – and instilled it in others – during her two-plus decades in prison. From becoming a playwright to mentoring other women, she shares how Christianity and her unshakeable faith helped her persevere and share faith in what became a viral video, bringing in celebrities like Kim Kardashian West to support her cause. This is both a deeply personal memoir and the story of all of the firsts Johnson has experienced through her activism, as well as a deep look into the systemic issue of mass incarceration.

One Community is a film, television and new media company that uses the power of storytelling to enable positive global social impact. “Alice Marie Johnson is the quintessential movie heroine,” said Scott Budnick, “She has resilience, fortitude and ultimately triumphs over adversity. We admire her and are proud to bring her story to life.”

Alice Marie Johnson says, “I feel humbled that the telling of my story gives hope and my years of pain were not in vain.”

ABOUT THE AUTHOR
Alice Marie Johnson earned national attention when reality star Kim Kardashian West advocated for her release from prison. She was reunited with her family when President Donald Trump granted her clemency on June 6, 2018. Alice had been serving a mandatory life sentence without parole for her first and only conviction in a nonviolent drug case. During her nearly 22 years of incarceration, Alice accomplished what has been termed as “extraordinary rehabilitation” and received numerous awards. Now an author, Alice has completed a memoir to be published in May. On International Women’s Day on March 8, she will be honored at the United Nations as a “Women’s Rights Defender.” President Trump’s monumental decision to grant Alice clemency has shined a light on the need to fix a broken system. Alice enjoys being a proud mother, grandmother, and great-grandmother.