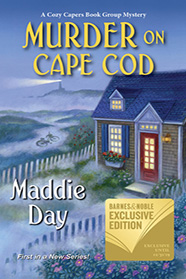 First in a New Series!

A Cape Cod shop owner and her book club must find a crafty killer in this charming new series from the Agatha-nominated author of the Country Store Mystery series.

Summer is busy season for Mackenzie “Mac” Almeida’s bicycle shop, nestled in the quaint, seaside hamlet of Westham, Massachusetts. She’s expecting an influx of tourists at Mac’s Bikes; instead she discovers the body of Jake Lacey. Mac can’t imagine anyone stabbing the down-on-his-luck handyman. However, the authorities seem to think Mac is a strong suspect after she was spotted arguing with Jake just hours before his death. Mac knows she didn’t do it, but she does recognize the weapon—her brother Derrick’s fishing knife.

Mac’s only experience with murder investigations is limited to the cozy mysteries she reads with her local book group, the Cozy Capers. So to clear her name—and maybe her brother’s too—Mac will have to summon help from her Cozy Capers co-investigators and a library’s worth of detectives’ tips and tricks. For a small town, Westham is teeming with possible killers, and this is one mystery where Mac is hoping for anything but a surprise ending…

Purchase Murder at the Cape at:
Kensington Books 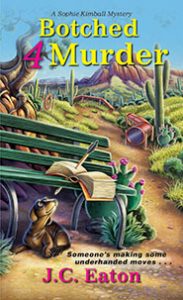 ophie “Phee” Kimball is getting dragged into the drama again at her mom’s Arizona retirement community. A new board member wants to get rid of two golf courses and replace them with eco-friendly parks, and some of the residents are pretty teed off about it. On top of that, her mother’s book club friend Myrna is being pushed out of the bocce league. These seniors are serious about winning, and Myrna’s dragging them down. She’s so bad at bocce, in fact, that when a community mem.ber’s dead body is discovered while Myrna’s practicing for a tournament, she assumes it was one of her own errant balls that killed the woman.

But before Myrna can be tossed off the bocce court and into criminal court, the police find an arrow in the victim’s neck. It looks like this was no accident—and Phee and her investigator boyfriend Marshall will have to team up to bounce a killer into the slammer . . .

You can purchase Botched 4 Murder at:
Kensington Books 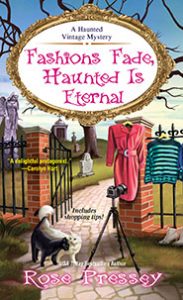 A photo shoot in a graveyard ends in a grave shooting . . .

Cookie Chanel—owner of the chic clothing store It’s Vintage Y’All in Sugar Creek, Georgia—has been hired to dress models for a fashion shoot. The spread will be featured in Fashion and Style magazine’s October issue—so the models are posing in a cemetery. As someone who can see and talk to ghosts, Cookie’s not spooked by the location. But she is surprised when a new ghost appears, decked out in 1920s couture. And she’s shocked when she hears a gunshot. Then a model runs toward her, saying the grumpy photographer has been edited out of the picture – for good. With help from her ghostly pals, Cookie must zoom in on the truth before she’s the next to strike a final pose…

You can purchase Fashions Fade, Haunted is Eternal at:
Kensington Books 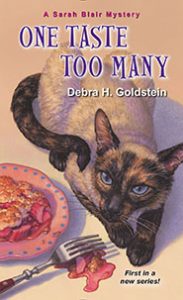 One Taste Too Many: A Sarah Blair Mystery #1 by Debra H. Goldstein

or culinary challenged Sarah Blair, there’s only one thing scarier than cooking from scratch—murder!

Married at eighteen, divorced at twenty eight, Sarah Blair reluctantly swaps her luxury lifestyle for a cramped studio apartment and a law firm receptionist job in the tired hometown she never left. With nothing much to show for the last decade but her feisty Siamese cat, RahRah, and some clumsy domestic skills, she’s the polar opposite of her bubbly twin, Emily—an ambitious chef determined to take her culinary ambitions to the top at a local gourmet restaurant . . .

Sarah knew starting over would be messy. But things fall apart completely when her ex drops dead, seemingly poisoned by Emily’s award-winning rhubarb crisp. Now, with RahRah wanted by the woman who broke up her marriage and Emily wanted by the police for murder, Sarah needs to figure out the right recipe to crack the case before time runs out. Unfortunately, for a gal whose idea of good china is floral paper plates, catching the real killer and living to tell about it could mean facing a fate worse than death—being in the kitchen!

You can purchase One Taste Too Many at:
Kensington Books 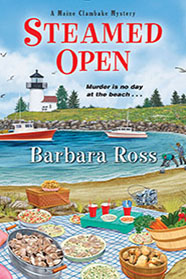 It’s summertime in Busman’s Harbor, Maine, and the clamming is easy—or it was until a mysterious new neighbor blocks access to the beach, cutting off the Snowden Family Clambake’s supply. Julia Snowden is just one of many townspeople angered by Bartholomew Frick’s decision. But which one of them was angry enough to kill?

Beachcombers, lighthouse buffs, and clammers are outraged after Frick puts up a gate in front of his newly inherited mansion. When Julia urges him to reconsider, she’s the last to see him alive—except the person who stabs him in the neck with a clam rake. As she pores through a long list of suspects, Julia meets disgruntled employees, rival heirs, and a pair of tourists determined to visit every lighthouse in America. They all have secrets, and Julia will have to work fast to expose the guilty party—or see this season’s clam harvest dry up for good.

You can purchase Steamed Open at:
Kensington Books 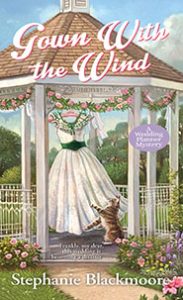 Gown With The Wind: A Wedding Planner Mystery #4 by Stephanie Blackmoore

Professional wedding planner Mallory Shepard knows her job is challenging under any circumstances. But when the groom is your ex and someone invites murder, there may never be another tomorrow . . .

Mallory’s fine—really—handling the wedding arrangements for her ex, Keith. But his fiancée, Becca, has at the last minute decided to switch from a Japanese-cherry-blossom theme to a Gone with the Wind theme. She wants to honor her ailing grandmother, who owns an impressive collection of GWTW memorabilia—and who is fiercely at odds with the groom’s mother over the nuptial plans.

But among other complications, Becca gets into a fight with an old childhood rival over a replica Scarlett O’Hara wedding gown. She wins the dress—but soon becomes a murder suspect when the other woman is found dead in Becca’s swimming pool. And it’s up to Mallory to solve the mystery behind this unhappy occasion, before a different kind of civil war breaks out . . .

You can purchase Gown With the Wind at:
Kensington Books

BEHIND THE WORDS welcomes Jill Eileen Smith. We’re excited to have you on Reader’s Entertainment. First, tell our readers a bit about yourself. Where...
Read more