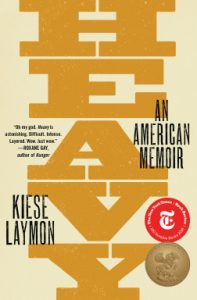 In this powerful, provocative, and universally lauded memoir—winner of the Andrew Carnegie Medal and finalist for the Kirkus Prize—genre-bending essayist and novelist Kiese Laymon “provocatively meditates on his trauma growing up as a black man, and in turn crafts an essential polemic against American moral rot” (Entertainment Weekly).

In Heavy, Laymon writes eloquently and honestly about growing up a hard-headed black son to a complicated and brilliant black mother in Jackson, Mississippi. From his early experiences of sexual violence, to his suspension from college, to time in New York as a college professor, Laymon charts his complex relationship with his mother, grandmother, anorexia, obesity, sex, writing, and ultimately gambling. Heavy is a “gorgeous, gutting…generous” (The New York Times) memoir that combines personal stories with piercing intellect to reflect both on the strife of American society and on Laymon’s experiences with abuse. By attempting to name secrets and lies he and his mother spent a lifetime avoiding, he asks us to confront the terrifying possibility that few in this nation actually know how to responsibly love, and even fewer want to live under the weight of actually becoming free.

“A book for people who appreciated Roxane Gay’s memoir Hunger” (Milwaukee Journal Sentinel), Heavy is defiant yet vulnerable, an insightful, often comical exploration of weight, identity, art, friendship, and family through years of haunting implosions and long reverberations. “You won’t be able to put [this memoir] down…It is packed with reminders of how black dreams get skewed and deferred, yet are also pregnant with the possibility that a kind of redemption may lie in intimate grappling with black realities” (The Atlantic).

Editorial Reviews for Heavy: An American Memoir by Kiese Laymon

“Heavy is a gorgeous, gutting book that’s fueled by candor yet freighted with ambivalence. It’s full of devotion and betrayal, euphoria and anguish, tender embraces and rough abuse…the liberation on offer doesn’t feel light and unburdened; it feels heavy like the title, and heavy like the truth…Salvation would feel too weightless—as if [Laymon] could forget who he is and where he has been. This generous, searching book explores all the forces that can stop even the most buoyant hopes from ever leaving the ground.”
—New York Times

“With echoes of Roxane Gay and John Edgar Wideman, Laymon defiantly exposes the ‘aches and changes’ of growing up black in this raw, cathartic memoir reckoning with his turbulent Mississippi childhood, adolescent obesity, and the white gaze.”
—O Magazine

“[Heavy] take[s] on the important work of exposing the damage done to America, especially its black population, by the failure to confront the myths, half-truths, and lies at the foundation of the success stories that the nation worships. In the process, Laymon … dramatize[s] a very different route to victory: the quest to forge a self by speaking hard truths, resisting exploitation, and absorbing with grace the cost of being black in America while struggling to live a life of virtue…You won’t be able to put [this memoir] down, but not because [it is] breezy reading. [It is], in Laymon’s multilayered word, heavy—packed with reminders of how black dreams get skewed and deferred yet are also pregnant with the possibility that a kind of redemption may lie in intimate grappling with black realities.”
—The Atlantic

“Heavy is one of the most important and intense books of the year because of the unyielding, profoundly original and utterly heartbreaking way it addresses and undermines expectations for what exactly it’s like to possess and make use of a male black body in America … the book thunders as an indictment of hope, a condemnation of anyone ever looking forward.”
—LA Times

“Staggering … Laymon lays out his life with startling introspection. Heavy is comforting in its familiarity, yet exacting in its originality … Laymon subtitled his book, ‘An American Memoir,’ and that’s more than a grandiose proclamation. He is a son of this nation whose soil is stained with the blood and sweat of his ancestors. In a country both deserving of his love and hate, Laymon is distinctly American. Like the woman who raised him and the woman who raised her, he carries that weight, finding uplift from sorrow and shelter from the storms that batter black bodies.”
—Boston Globe

“Heavy is a compelling record of American violence and family violence, and the wide, rutted embrace of family love … Kiese Laymon is a star in the American literary firmament, with a voice that is courageous, honest, loving, and singularly beautiful. Heavy is at once a paean to the Deep South, a condemnation of our fat-averse culture, and a brilliantly rendered memoir of growing up black, and bookish, and entangled in a family that is as challenging as it is grounding.”
—NPR.org

“Weight is both unavoidably corporeal and a load-bearing metaphor in novelist-essayist Kiese Laymon’s sharp, (self-)lacerating memoir, addressed to the single teen mom turned professor who raised him to become exceptional…a deeply personal book, where race, class, and the scars of sexual violence are front and center.”
—New York Magazine

“Laymon’s memoir is a reckoning, pulling from his own experience growing up poor and black in Jackson, Mississippi, and tracking the most influential relationships, for better or worse, of his life: with his brilliant but struggling single mother, his loving grandma, his body and the ways he nurtures and punishes it, his education and creativity, and the white privilege that drives the world around him…with shrewd analysis, sharp wit, and great vulnerability — Laymon forces the reader to fully consider the effects of the nation’s inability to reconcile its pride and ambition with its shameful history.”
—Buzzfeed

“Laymon examines his relationship with his mother growing up as a black man in the South, exploring how racial violence suffered by both impacts his physical and emotional selves.”
—Time

“Spectacular … So artfully crafted, miraculously personal, and continuously disarming, this is, at its essence, powerful writing about the power of writing.”
—Booklist, starred