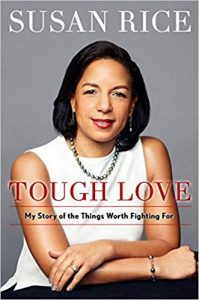 Former National Security Advisor to President Barack Obama and U.S. Ambassador to the United Nations Susan E. Rice will publish a memoir with Simon & Schuster, Tough Love: My Story of the Things Worth Fighting For, on October 8, 2019.

In Tough Love, Susan Rice reflects on a dynamic career on the frontlines of American national security and foreign policy, delivering an inspiring account of a life in service to family and country. Mother, wife, scholar, diplomat, and fierce champion of American interests and values, Rice connects the personal and the professional, laying bare the family struggles that shaped her early life in Washington, D.C. and examines the ancestral legacies that influenced her. Rice’s elders – Jamaican immigrants on one side and descendants of slaves on the other – shared values, high expectations, and the compulsion to see each generation rise while paying it forward. Taught early, with tough love, how to compete and excel as an African-American woman where there are precious few, she shares wisdom gained along the way. With unmatched insight and candor, Rice provides an intimate insider’s account of some of the most complex issues confronting the United States over three decades.  Rice recounts untold stories behind such recent national security challenges as the war against ISIS, the Edward Snowden leaks, the Syria conflict, Russian interference in the 2016 election, and the surreal transition to the Trump Administration.  Tough Love concludes with an appeal to the American public to bridge our dangerous domestic divides in order to preserve our democracy and sustain our global leadership.

“Ever since my name became synonymous with Benghazi, I have wanted to tell my own story – who I am, where I came from, what motivates and defines me,” said Ambassador Rice.  “My sincere hope is that people of all backgrounds will find inspiration and empowerment from the lessons I have learned – as a senior policy-maker, leader, mother, a woman of color, and a proud American committed to the unity, strength, and renewal of our country.”

Dawn Davis, Vice President and Publisher of 37 INK, who will edit the book for the Simon & Schuster imprint, added, “Susan Rice’s memoir is a surprising and illuminating account of a woman’s journey – a journey that encompasses an unconventional childhood, marriage, motherhood, service to her country, and some of the most important international issues of our time. There’s so much more to her life than what’s been reported. Tough Love is a window into a public servant’s public and personal challenges.”

Ambassador Susan E. Rice served as President Obama’s National Security Advisor and U.S. Permanent Representative to the United Nations from 2009-2017 and as U.S. Assistant Secretary of State for African Affairs, Special Assistant to the President, and Director for International Organizations and Peacekeeping at the National Security Council under President Clinton from 1993-2001. Rice began her career as a management consultant with McKinsey and Company and later served several years as a Senior Fellow at the Brookings Institution.

Ambassador Rice is currently Distinguished Visiting Research Fellow at the School of International Service at American University, a Non-Resident Senior Fellow at the Belfer Center for Science and International Affairs at Harvard’s Kennedy School of Government, and a Contributing Opinion Writer for The New York Times. She also serves on the board of Netflix and the John F. Kennedy Center for the Performing Arts.  Previously, she was a Director at the Bureau of National Affairs (now Bloomberg BNA) and served on several non-profit boards, including the National Democratic Institute and the U.S. Fund for UNICEF.

Rice received her Master’s degree and Ph.D in International Relations from Oxford University, where she was a Rhodes Scholar, and her B.A. in History with honors and distinction from Stanford University. A native of Washington D.C. and graduate of the National Cathedral School for Girls, she is married to Ian Cameron, and they have two children.