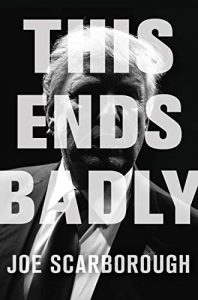 Mary Ann Naples, VP and Publisher of Hachette Books, announced today the forthcoming publication of This Ends Badly: How Donald Trump Conned America (Hachette Books, 9/17/19) – a riveting account of MSNBC host Joe Scarborough’s friendship-turned-bad with the President, offering revealing insights into Trump’s mind and an indictment of his hostile takeover of the Republican party and American politics. The book will be edited by executive editor Paul Whitlatch, who acquired world rights to the book, which will be available in hardcover, ebook, and an audio edition by Hachette Audio.

As Scarborough and Morning Joe co-host Mika Brzezinski observed Donald Trump’s political rise in 2016, they found themselves uttering the same line to each other: “This ends badly.” But it wasn’t always that way. After first meeting Trump in 2003, Scarborough and Brzezinski found him engaging and generous, if terribly insecure, and frequently invited Trump on Morning Joe.

But as Trump grew to be an unstoppable political force in late 2015, with his giant rallies and rambling speeches laced with bigotry, Scarborough saw his friend in a disturbing new light. becoming one of the most prominent conservative voices to speak out against Trump’s rise, even as the anxious candidate continued calling him to vent and ask for advice. As Trump’s new presidency quickly imploded, the relationship again ruptured, culminating in a public war of words.

This Ends Badly will finally reveal the full story of Joe Scarborough’s falling out with Donald Trump, and how Trump came to fear his old friend inflicting permanent damage on the presidency. As the media and political insider with the greatest access to Trump, Scarborough’s account will be a must-read, revealing behind-the-scenes drama filled with interactions with the president, as well as conversations with figures like Jared Kushner, Mike Pompeo, John McCain, Paul Ryan, and many more.