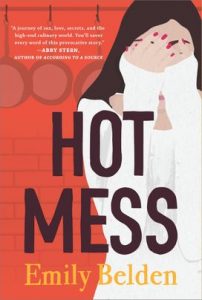 Dear Mother: Poems on the hot mess of motherhood by Bunmi Laditan

In the tradition of Instagram poets like Atticus or Neil Hilborn, Bunmi Laditan introduces her first collection of poetry, pitched as a Milk and Honey about motherhood. With the compassion and wit that made her a social media sensation among mothers around the world, Laditan puts into evocative and relatable words what so many of us feel but can’t quite express, capturing the honesty, rawness, sheer joy and total chaos of motherhood.

Twentysomething Allie Simon is used to playing by the rules—until Chicago’s most sought-after, up-and-coming culinary genius, Benji Zane, walks into her world and pulls her into his. The only thing more renowned than Benji’s mouthwatering masterpieces and equally luscious good looks? His struggle with addiction and his reckless tendency to live life on the edge, no matter the havoc he wreaks along the way. But loving someone means supporting him no matter what, or so Allie tells herself. That’s why, when Benji’s offered the chance to light up foodie hot spot Randolph Street with a high-profile new restaurant, Allie takes the ultimate risk and invests her life savings in his dream.

Then one day Benji disappears, relapsing to a place where Allie can’t reach him. Left with nothing but a massive withdrawal slip and a restaurant that absolutely must open in a matter of weeks, Allie finds herself thrust into a world of luxury and greed, cutthroat business and sensory delight. Lost in the mess of it all, she can either crumble completely or fight like hell for the life she wants and the love she deserves.

With razor-sharp wit and searing insight, Emily Belden serves up a deliciously dishy look behind the kitchen doors of a hot foodie town, perfect for fans of Sweetbitter and The Devil Wears Prada.

BUNMI LADITAN is an award-winning, Webby-nominated writer from California who lives in Quebec, Canada, with her family. She’s contributed to the New York Times, Parenting magazine and the Huffington Post, and is best known for the satirical Twitter account The Honest Toddler, as well as her bestselling books Toddlers Are A**holes: It’s Not Your Fault and Confessions of a Domestic Failure, which immediately became must-reads for her thousands of fans and moms everywhere. 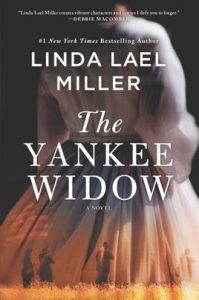 A richly layered, emotional novel about one woman’s courage and the choices she must make in the face of a dangerous war.

Caroline is the young wife of Jacob, who together live on a farm raising their daughter just outside of Gettysburg. When Jacob joins the Northern army, no one anticipates he will not return. Then Caroline gets word that her husband is wounded, and she must find her way alone to Washington City and search among the thousands of casualties to find him.

When Jacob succumbs to his injuries, she brings his body home on the eve of the deadliest battle of the war. With troops and looters roaming the countryside, it is impossible to know who is friend and who is foe. Caroline fights to protect those she holds most dear while remaining compassionate to the neediest around her, including two strangers from opposite sides of the fight. Each is wounded… Each is drawn to her beauty, her kindness. Both offer comfort, but only one secretly captures her heart. Still, she must resist exposing her vulnerability in these uncertain times when so much is at risk.

In The Yankee Widow, gifted storyteller Linda Lael Miller explores the complexities and heartbreak that women experienced as their men took up arms to preserve the nation and defend their way of life.

Linda Lael Miller is a #1 New YorkTimes and USA TODAY bestselling author of more than one hundred  novels. Long passionate about the Civil War buff, she has studied theera avidly and has made many visits to Gettysburg,  where she has witnessed reenactments of the legendary clash between North and South. Linda exploresthat turbulent time in The Yankee Widow. 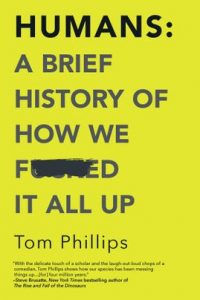 Humans: A Brief History of How We F*cked It All Up by Tom Phillips

Weaving together history, science, politics and pop culture, Humans offers a panoramic exploration of humankind in all its glory, or lack thereof. From Lucy, our first ancestor, who fell out of a tree and died, to General Zhou Shou of China, who stored gunpowder in his palace before a lantern festival, to the Austrian army attacking itself one drunken night, to the most spectacular fails of the present day, Humans reveals how even the most mundane mistakes can shift the course of civilization as we know it. Lively, wry and brimming with brilliant insight, this unique compendium offers a fresh take on world history and is one of the most entertaining reads of the year.

Tom Phillips is a journalist based in London. He was the editorial director of BuzzFeed UK and studied archaeology, anthropology and the history and philosophy of science at Cambridge University. 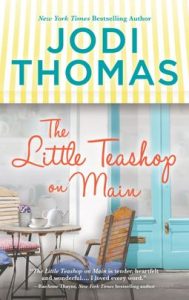 The Little Teashop on Main by Jodi Thomas

A rainy-day ritual—a tea party between three little girls—becomes the framework of not only their friendship, but their lives.

Redheaded, curly-haired Zoe is openhearted, kind and free-spirited, and dreams of becoming a famous actor in New York City. Shy Emily struggles with mental health but has the heart and soul of a writer. And Shannon—tall, athletic, strong—has a deep sense of loyalty that will serve her well when she heads off to military college.

As Zoe, Emily and Shannon grow into women—forging careers, following dreams and finding love—they’ll learn that life doesn’t always unfold the way they want it to, but through it all, the one constant is each other, and their regular tea parties. And when the unthinkable happens, the girls must come together to face the greatest test of all.

Purchase The Little Teashop on Main at:
Harlequin Books

New York Times bestselling author Jodi Thomas is a fifth-generation Texan who sets many of her stories in her home state, where her grandmother was born in a covered wagon. She is a certified marriage and family counselor, a Texas Tech graduate and writer-in-residence at West Texas A&M University. She lives with her husband in Amarillo, Texas. 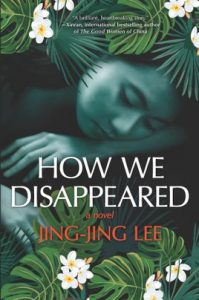 How We Disappeared by Jine-Jing Lee

A mesmerizing novel of World War II Singapore, “a story about memory, trauma, and ultimately love” (New York Times)—for fans of Pachinko and We Were the Lucky Ones

Singapore, 1942. As Japanese troops sweep down Malaysia and into Singapore, a village is ransacked, leaving only two survivors and one tiny child.

In a neighboring village, seventeen-year-old Wang Di is strapped into the back of a troop carrier and shipped off to a Japanese military brothel where she is forced into sexual slavery as a “comfort woman.” After sixty years of silence, what she saw and experienced still haunts her.

In the year 2000, twelve-year-old Kevin is sitting beside his ailing grandmother when he overhears a mumbled confession. He sets out to discover the truth, wherever it might lead, setting in motion a chain of events he never could have foreseen.

Weaving together two time lines and two very big secrets, this stunning debut opens a window on a little-known period of history, revealing the strength and bravery shown by numerous women in the face of terrible cruelty. Drawing in part on her family’s experiences, Jing-Jing Lee has crafted a profoundly moving, unforgettable novel about human resilience, the bonds of family and the courage it takes to confront the past.

Purchase How We Disappeared at:
Harlequin Books

Jing-Jing Lee was born and raised in Singapore. She earned a master’s degree in creative writing from Oxford in 2011 and has since seen her poetry and short stories published in various journals and anthologies. How We Disappeared is her first novel. She currently lives in Amsterdam. 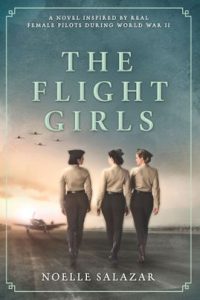 The Flight Girls by Noelle Salazar

Shining a light on a little-known piece of history, the Women Airforce Service Pilots, The Flight Girls is a sweeping portrayal of women’s fearlessness, love, and the power of friendship to make us soar.

1941. Audrey Coltrane has always wanted to fly. It’s why she implored her father to teach her at the little airfield back home in Texas. It’s why she signed up to train military pilots in Hawaii when the war in Europe began. And it’s why she insists she is not interested in any dream-derailing romantic involvements, even with the disarming Lieutenant James Hart, who fast becomes a friend as treasured as the women she flies with. Then one fateful day, she gets caught in the air over Pearl Harbor just as the bombs begin to fall, and suddenly, nowhere feels safe.

To make everything she’s lost count for something, Audrey joins the Women Airforce Service Pilots program. The bonds she forms with her fellow pilots reignite a spark of hope in the face war, and—when James goes missing in action—give Audrey the strength to cross the front lines and fight not only for her country, but for the love she holds so dear.

Noelle Salazar was born and raised in the Pacific Northwest, where she’s been a Navy recruit, a medical assistant, an NFL cheerleader and always a storyteller. When she’s not writing, she can be found dodging raindrops and daydreaming of her next book. Noelle lives in Bothell, Washington, with her husband and two children. The Flight Girls is her first novel.