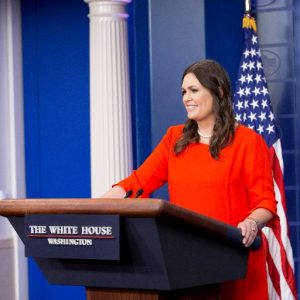 It was announced today that former White House Press Secretary Sarah Huckabee Sanders will publish a memoir about her life and experiences in the Trump Administration. St. Martin’s Press Editor-inChief George Witte acquired World Rights from literary agent David Limbaugh. Publication for the as-yet-untitled book is planned for fall 2020.

Sarah Huckabee Sanders served as the 29th White House Press Secretary under President Donald Trump, the third woman and the first mother to hold the position. A trusted confidante of the President, Sarah advised him on everything from press and communications strategy to personnel and policy. For two and a half years, Sarah was at the President’s side, battling with the media, working with lawmakers and CEOs, and accompanying the President on every foreign trip, including dozens of meetings with foreign leaders. In her book, she will recount her years on the front line of the campaign and in the administration, including the most dramatic and challenging moments. Sarah will address subjects including the media, family, faith, and performing an all-consuming and highly visible job while raising her young family.

Sarah Huckabee Sanders comments, “From Arkansas to the White House and back, I’m excited to tell my story about the challenges of being a working mom at the highest level of American politics, and my role in the historic fight raging between the Trump administration and its critics for the future of our country.”

George Witte comments, “Sarah Huckabee Sanders exemplifies grace under pressure, and her memoir will offer a truly unique perspective on the most important issues, events, and both public and behind-the-scenes conversations inside the White House.” Sarah Huckabee Sanders served as the White House press secretary for President Trump from July 2017 through June 2019. She previously joined the administration as deputy press secretary in January 2017 after working as a senior adviser for Trump’s election campaign. Upon her departure from the administration, President Trump described Sarah as “irreplaceable,” a “warrior” and “very special person with extraordinary talents, who has done an incredible job.”

Sanders has previously worked in leadership roles for U.S. Senators, Governors, and presidential campaigns. In Arkansas, Sanders was a senior adviser to Sen. Tom Cotton in 2014, when he defeated incumbent Democratic Sen. Mark Pryor, and was campaign manager for Sen. John Boozman in 2010 when he defeated incumbent Democratic Sen. Blanche Lincoln. In 2007 and 2008 Sanders helped lead her father, former Arkansas Governor Mike Huckabee, to victory in the Iowa Caucuses and seven other states as his National Political Director.

Sanders advises major Fortune 500 companies and non-profits, and previously served as campaign manager of the ONE campaign, a global non-profit founded by U2’s Bono to take action to end extreme poverty and preventable disease, particularly in Africa.

Sanders has been recognized in TIME Magazine’s “40 under 40” as one of the best political operatives of her generation and is a Fox News contributor. She is married to her husband, Bryan, and they have three children, Scarlett, Huck, and George, and live in Little Rock, Arkansas.