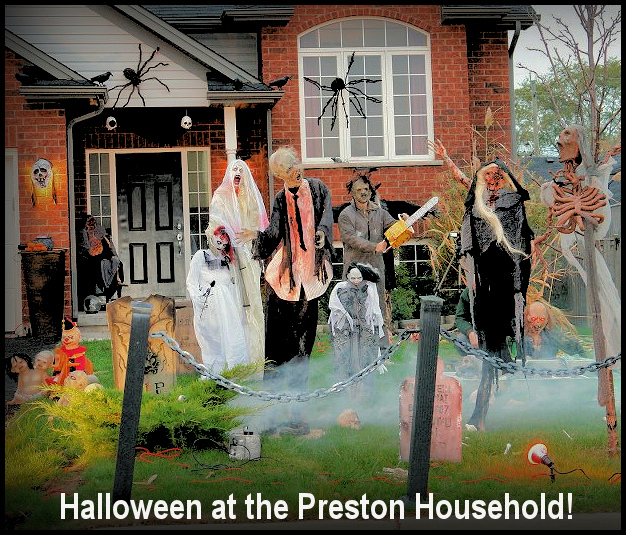 I have always been a fan of Halloween, and for most people, the reason is apparent. When I about ten, I dressed up for Halloween as Kolchak: The Night stalker, clad in a cheap straw hat, white slacks with matching coat, and white sneakers. Kolchak was my hero. I watched the show religiously every week. Often a fight might erupt with my older brother. He was into The Six Million Dollar Man. For those of you too young to remember the show, Kolchak: The Night Stalker was about a reporter named Carl Kolchak, who worked for several newspapers, from Chicago to New York, and eventually Las Vegas.  Kolchak had an uncanny talent for stumbling onto a supernatural story. Like, the reincarnation of Jack the Ripper, a Skinwalker haunting Las Vegas skyscrapers, a vampire, or a robot.

For its time, it was a fun show.

Every year I would buy something new for Halloween. A ghoul, a creature, a fog machine, skulls, I would dress the place up with body parts in the driveway, Leatherface on the lawn. Everything about my lawn said this guy likes Halloween. There were other rumblings too. Like, I might be disturbed, or I was some kind of vampire that fed on the fear of the children in the neighborhood.

Bunch of gossips if you ask me.

When I independently published my debut novel, The Equinox, in 2012, I decided to do 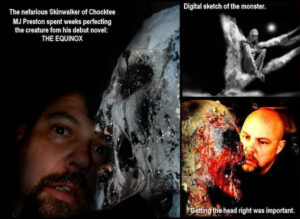 something a little different for Halloween that year. Equinox was a story about an indigenous man from the NWT tracking a murderous Skinwalker across 20th century North America that leaves behind several eviscerated bodies in its wake.

What I wanted to do was to sculpt a beast that would embody the Skinwalker from Equinox. I got down to work. I already had several tools at my disposal, like fake jagged teeth, a battered wig holder made from Styrofoam, and a big container of liquid latex. I started with an old rubber mask, and from there, I built a seven and a half foot version of the skinwalker.

It was sort of funny, because across the street from me was a somewhat religious family whose denomination was unknown. At least to me. What I did know about them is that they had bought the house the previous year from a guy I used to go over and share the odd beer. They were nice enough people, a little strange. They acted a lot like the Brady Bunch. Their discussions seemed almost scripted, and they moved like a small pack of animals. I offered the father a beer once, and I never saw a guy so agitated that his wife might find out.

So, if I can set the scene, I was surrounded by ghouls, zombies, vampires, and now I was working on something even more horrific in my garage. Across the street, the family, like tenants of Stepford, Connecticut, set their sights on me. Even the dog, a cute border collie, looked medicated.

Just as I was applying another coat of latex to the monster’s head, the robot Brady family turned toward me and started to march across the street.

Under my breath, I muttered, “Ah geez.” They crossed the road like a herd of animals, tightly grouped, the father and wife leading the way, a maniacal Brady grin painted upon their faces. I kept my head down into my work until it became inevitable. I looked up when they reached my driveway, setting down the paintbrush I had been using to apply the latex and put on my best smile. “Well, hello there,” I greeted.

Neither said anything at first, waiting instead until they halted in my open garage door. Missus Brady then looked around, disapproving, taking in the vampire, the chainsaw, the body limbs, and the crypt I had built. She had a weird smile holding back her words.  I’m sure she wanted to say, “Evil! Blasphemer! You’re poisoning the children!” Instead, she asked, “Well, what do we have here?” 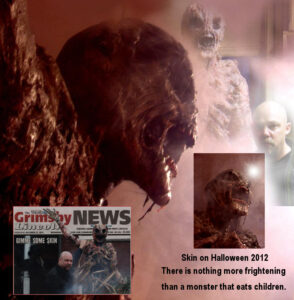 Beside her, her daughters said, “This is creepy, Mommy.”

Mrs. Brady nodded her head in agreement staring me down.

“Halloween, ah, yes.” She nodded again as if I’d just told her I’d joined the local Satanic Chapter. Then she squinted, that weird medicated smile on her face only interrupted by the contemptuous nod. I reached down and picked up a beer I had been sipping while working.

Then the little boy spoke, “Mom. Why does he do all this stuff?”

Nothing beats being talked about by a nine-year-old boy.

Her smile faltered as if she was thinking of her best way to excuse my actions. “Well, “she said, “Clearly, he likes doing this stuff.”

“Clearly.” I agreed and took another sip.

But I’m thinking, Please take your weird family and go back to your garage!

She turned to me, smile never wavering, but I think I know a nerve,

And suddenly they all were all looking at me.

Uncomfortably, I said to the kids. “You kids come over early, and I’ll double up your candy.”

Nothing. Not a single response. Not from the kids or their parents.

I decided to go nuclear. “Can I offer anyone a beer?”

The confidence of the group shuddered.

“Is he offering us beer, Mommy,” the girl asked?

“No, sweetheart, he was offering Daddy a beer,” she replied.

Finally, mom said, “Well, we’ll leave you to your work.”

Then, with the precision of a drill squad, they withdrew from my property and retreated to their own house. The boy looked back once, inventorying the stuff in my garage, but he didn’t smile. There was something wrong with what I was doing, according to them. Dismissing me and my evil ways, he followed the rest of the family inside. I know this sounds paranoid, but I swear, even the dog looked at me indignantly.

That Halloween, I unleashed Skin and set up the front lawn for Halloween. When the darkness fell, the Brady bunch was nowhere. Not taking me up on my offer of double candy and avoiding the onslaught of ghosts, goblins, zombies, and ballerinas carrying bags to collect treats. It even garnered some media attention. I guess the Brady’s didn’t dig the scene, but I don’t hold it against them. They were uncomfortable with the pagan holiday, and me too. It’s a free world.

The skinwalker of Chocktee made further appearances in future Halloweens until I moved from Ontario to Alberta. He was snapped up in a Halloween yard sale. I would think he is still making his presence known on the Niagara escarpment. To those who read my sordid tale, I thank you and wish a happy Halloween to all in whatever form it takes in 2020. 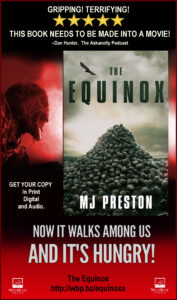 It has existed for centuries.

A dark curse held captive by an ancient ritual, a creature of insatiable hunger possessing the ability to change shape at will. During the spring and fall equinox it would break through the walls, separating our worlds to feed.

Now it walks among us, unrestrained, and very hungry.

Daniel Blackbird has been chasing the murderous shapeshifter known as The Walker across North America for over a decade. From North of the 60th parallel to the city of Chicago and into the heartland of a small midwestern town in Manitoba. Blackbird follows unrelenting, obsessed with vengeance.  In its wake, the Walker leaves a bloody trail of eviscerated victims. Along the path. Blackbird finds himself drawn to the Prairie town of Thomasville where a string of child murders is being investigated.

There, the chief of police, David Logan has uncovered a mass grave in the cornfield of a local farmer named Stephen Hopper. Hopper has confessed, even identified the graves, but claims that he is merely the caretaker of this macabre burial ground and that a creature who he thinks is the devil is responsible.

As Chief Logan grapples with the unthinkable, Blackbird sets out for the prairie town which, as the Equinox approaches, is destined to become a killing ground where cultures and worlds will collide.

Will he get there in time? And who will believe him?

ABOUT THE AUTHOR
My name is MJ Preston
I write Horror, Syfy, and Crime Thrillers.
Come and find me!