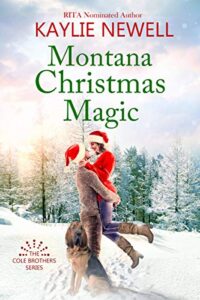 Kaylie Newell was born in the great state of Oregon, where she was raised alongside rivers and lakes and scruffy dogs that chased their tennis balls as far as Kaylie’s noodle arms could throw. As she grew, so did her imagination, and it didn’t take long to realize she was a romantic at heart. She began to fancy herself the future wife of a cowboy, the likes of which graced every paperback novel she could get her hands on.
She decided to go to college in Oklahoma to snag herself one, but irony won over when she fell in love with a hippie in sheep’s clothing instead. Together, they came back to Oregon, started a family, and watched their dreams unfold. Kaylie wrote her first book when her girls were toddlers, editing sex scenes with The Wiggles on in the background.
She’s proud of many things in life, among them the fact that she can still recite her lines from Romeo and Juliet from her seventh-grade play, the fact that she can set a grilled cheese sandwich on fire faster than most people can make one, but mostly she’s proud of the stories blossoming inside her noggin on a daily basis.

Her latest book Montana Christmas Magic is out now.

Sheila Englishhttp://sheilaenglish.com
Award-winning author of short stories and comic books. Telly award-winning producer and director of many book trailers.
Previous articleBook Lights gets Spooky with Comic Book Author Laura Marks
Next articleBookBub and Chirp – Are they worth it?