Search
Home Featured Former Congressman Will Hurd to Publish Book on the Future of the... 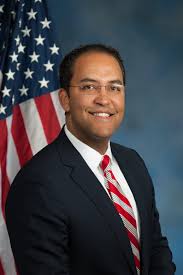 Simon & Schuster announced that it will publish former United States Representative Will Hurd’s book on the future of the Republican party and America’s path forward in tumultuous times. Hurd, who has been called “the future of the GOP” by Politico and, for a time, was the House’s only Black Republican, represented a 71% Latino swing district in Texas that runs along 820 miles of U.S.-Mexico border. A former undercover CIA officer in South Asia and cybersecurity executive, Hurd brought his expertise in intelligence and security to Congress.

The son of a White mother and Black father, Hurd frequently stood as an independent voice against President Trump and the GOP’s divergence from historical conservative values. Additionally, he has written about his views for major news publications and appears regularly on cable and network news. In his book, which is currently untitled and slated for publication in 2022, Hurd draws on his experience to offer a clear-eyed, forward thinking playbook for the country rooted in timeless Republican ideals, bipartisanship, inclusivity, and democratic values. Stuart Roberts at Simon & Schuster acquired North American, audio, and first serial rights from Eve Attermann at WME.

“The only way big things have ever been done in this country is by doing them together, because way more unites us than divides us,” Hurd said. “Whether you are a Republican, Democrat, Independent or don’t vote, you should care about having two strong parties that can compete in an open marketplace of ideas. I’m excited to share stories from growing up in an interracial family in Texas, serving my country in the back alleys of dangerous places, and serving in the halls of Congress after defying the odds in one of the most competitive districts in the country. The timeless lessons I learned from these experiences can serve as a road-map for how to make the tough choices necessary to keep this century the American Century.”

Dana Canedy, Senior Vice President and Publisher of Simon & Schuster says, “Simon & Schuster is looking forward to publishing Will Hurd’s incisive and inspiring book on how America can chart a future that matches our potential. Hurd is an important and respected conservative voice who is pushing the national conversation in new directions. His unique experience in and outside of Congress equip him with valuable perspective and insight.”