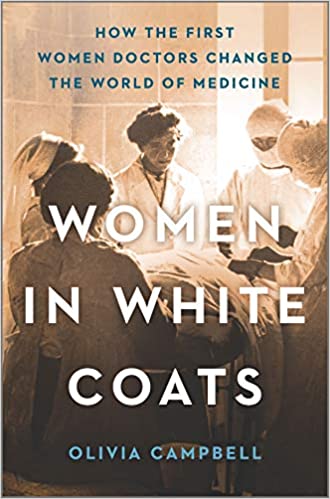 The true story of three pioneering Victorian women who broke down barriers in the medical field to become the first women doctors, WOMEN IN WHITE COATS details how they banded together to enter this male-dominated field and revolutionize the way women receive healthcare.

Elizabeth Blackwell had no intention of studying medicine when her friend, Mary Donaldson, begged her to become a lady doctor. Mary was dying from uterine cancer that went undetected because, like so many Victorian women, she felt uncomfortable being examined by a male doctor.

Medicine was newly regulated in the 1800s, requiring doctors to receive formal training to be allowed to practice. Even though women have worked as healers since ancient times, men in the Victorian age found the idea of a lady doctor to be ludicrous. So much so, that when New York Geneva’s medical students were asked in 1847 if Elizabeth Blackwell could attend their lectures, they believed it to be a joke from a rival school and said yes. Their dismissive attitude allowed Elizabeth Blackwell the access to study and the opportunity to become the first woman ever to earn a medical degree.

However, the medical colleges swiftly closed their doors to other women – one woman was an exception, to have more attending classes and practicing medicine would challenge men’s position of power in medicine. WOMEN IN WHITE COATS follows Dr. Elizabeth Blackwell’s exceptional journey into medicine, as she was joined by Dr. Elizabeth Garrett Anderson and Dr. Sophia Jex-Blake, each going to extraordinary lengths to earn a medical degree. Together, these women founded the first-ever women run hospitals and teaching colleges, providing resources and a path for other women pursuing medicine to follow.

With gripping storytelling based on the extensive correspondence and access to archival documents, WOMEN IN WHITE COATS brings to life these three trailblazing women who revolutionized medicine by becoming the first female doctors, fighting the prejudices of men in American and the United Kingdom who wanted to keep them out, and ultimately winning a place for women in medicine.