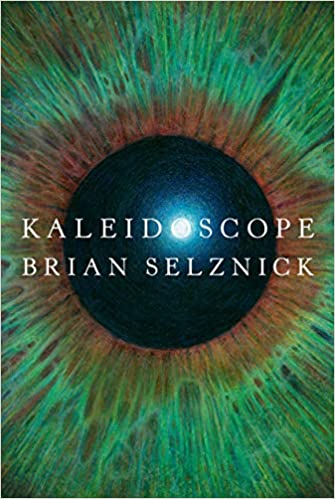 Scholastic, the global children’s publishing, education and media company, announced today that it will publish Kaleidoscope, a spellbinding and stunning new novel by Brian Selznick, the #1 New York Times bestselling author and Caldecott Medal-winning illustrator of The Invention of Hugo Cabret which was adapted into an Oscar®-winning film Hugo. Kaleidoscope, for readers ages 10 and up, is a multi-layered story about love and loss and will be published simultaneously in hardcover and ebook formats on September 21, 2021 in the U.S., U.K., Canada, and worldwide thereafter.

A ship. A garden. A library. A key. In Kaleidoscope the incomparable Brian Selznick presents the story of two people bound to each other through time and space, memory and dreams. At the center of their relationship is a mystery about the nature of grief and love which will look different to each reader. Told over the course of twenty-four chapters, each featuring an iconic black and white graphite illustration by Selznick, Kaleidoscope is a feat of storytelling that illuminates how even the wildest tales can help us in the hardest times.

Ellie Berger, President of Scholastic’s Trade Division, said: “Brian Selznick is a boldly innovative storyteller and artist. His latest masterpiece, Kaleidoscope, is both mysterious and moving, haunting and heartwarming—a searing and hopeful tale that will be treasured by readers.”

“Every Brian Selznick book not only tells you a great story, but shows you a compelling new way that a great story can be told. Kaleidoscope beats with a human heart and breathes the oxygen of life itself. And if you want to know what I mean by that, you’ll have to lose yourself in its pages and give yourself to the words and images it offers,” said David Levithan, VP, Publisher, and Editorial Director for Scholastic.

Brian Selznick said, “I’ve been working on Kaleidoscope for the last five years, but the book transformed completely since the pandemic began into something unlike anything else I’ve written or illustrated. Readers of my other books will find familiar elements in it: a trip to the moon, shipwrecks, fires, angels and keys. But, like looking through a kaleidoscope, all these elements have shifted and rearranged into something new. I can’t wait to share it with everyone.”

Brian Selznick broke open the novel form with his innovative and genre-breaking books creating an entirely new reading experience. He is the Caldecott Medal-winning creator of the #1 New York Times bestsellers The Invention of Hugo Cabret, adapted into Martin Scorsese’s Oscar-winning movie Hugo; and Wonderstruck, adapted into the eponymous movie by celebrated filmmaker Todd Haynes, with a screenplay by Selznick; as well as the New York Times bestsellers The Marvels and Baby Monkey, Private Eye co-written by David Serlin. Most recently, he illustrated the 20th anniversary paperback edition covers of J.K. Rowling’s Harry Potter series. His books have garnered countless accolades worldwide, and have been translated into more than 35 languages.