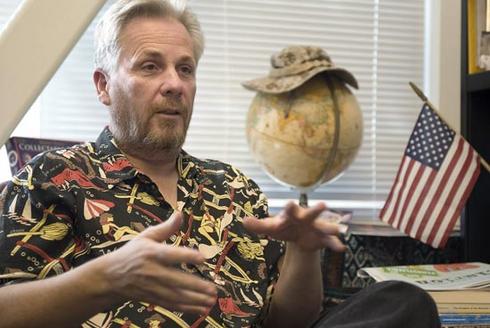 Welcome Bruce, we’re excited to have you join us on Reader’s Entertainment. First, tell our readers where you’re from, where you live? Is writing your full-time job?

I was born in Seattle, WA, and I live in Southern California. I am a tenured history professor and write everyday.

Give us a look at your writing day.

I get up very early (0430-0500) and write for a few hours before everyone else gets up, then I will write some during the day as well.

Tell us a bit about your latest release.

My latest book is a graphic novel called Snarc 2. Snarc is an alien-human hybrid who comes to Earth to prepare us for colonization. He changes his mind when he discovers how much he likes and admires us. Hi wise-cracking companion, The Cosmic Staff, helps Snarc as they have many adventures and learn about us. Snarc offers a combination of humor, history, science-fiction, fantasy, and social issues.

I first thought of the character while working in a prison guard tower in Mannheim, West Germany in 1980. In 1982, I illustrated and wrote five Snarc comic strips in the Montana Tech school newspaper. My dream was to create a comic book but I dropped out of engineering school and eventually ended up back in the US Army. Snarc came back to life in 2019 and was able to get comic book illustrator Gary Dumm to work his magic.

Mixing in social issues without being preachy or pendantic.

Villains are tough, but I love writing them. You have to find something you like about them.

My wife Ginger says I am Snarc, so there you go.

I learned to read because of comic books, so I will stick with that genre. Harvey Pekar and American Splendor is an example of comics at their best, both in terms of writing and art.

I can bend spoons using psychokinesis.

Bad mood and anger. I don’t write well when I am angry.

How does Ginger (my wife) inspire me? She is the reason I have published 5 books in the past five years and have learned to live my dreams.

Thank you so much for stopping by today, Bruce! Be sure to check out Bruce’s website for more details on his writing. 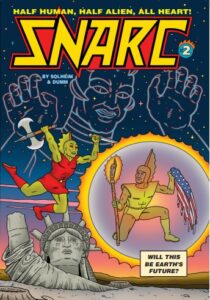 Welcome to Snarc 2, the continuing adventures of Snarc, our favorite intergalactic traveler, and his companion Cosmic Staff. As you can see, this issue is in book form, or, if you will, graphic novel form. Snarc, a human-alien hybrid, must find a way to save humanity from the bellicose reptilian inhabitants of his home planet Maron. Along the way, Snarc meets new people and learns more about everyday life on Earth. You’ll discover Snarc’s origin as well as that of his Cosmic Staff. You’ll also meet a new intriguing character–Dr. Jekyll: Alien Hunter.

Many people disparage comic books. Comics should be taken seriously and are part of what is known as sequential art. Comics aren’t just for kids. Many people say that comics, as we’ve known them, are on the way out, but they are wrong. Harvey Pekar once said, that “you can do anything with words and pictures.” They may not look exactly the way they do now, but comics in the future will still inspire, educate, and entertain us.