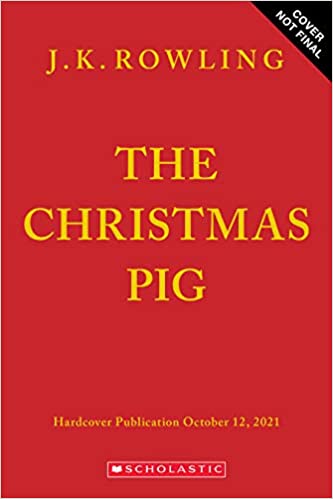 Scholastic, the global children’s publishing, education and media company, announced today that it will publish J.K. Rowling’s new book for children, The Christmas Pig, on Tuesday, October 12, 2021.
The book will be simultaneously published in the US and Canada by Scholastic, in the UK, Australia, New Zealand, Ireland, and India by Hachette Children’s Group, as an audiobook in English, Spanish, German, French, Japanese and Italian by Audible, and in over twenty additional languages by publishers around the world*, making it a truly global publication. The book for readers ages 8 and up will be released in jacketed hardcover ($24.99 US / $29.99 Canada) and eBook ($14.99 US / $15.99 Canada).
The Christmas Pig is a heartwarming, page-turning adventure about one child’s love for his most treasured toy, and how far he will go to find it. A standalone story and unrelated to any of J.K. Rowling’s previous work, it’s a tale for the whole family to fall in love with.
About the book
One boy and his toy are about to change everything…
Jack loves his childhood toy, Dur Pig. DP has always been there for him, through good and bad. Until one Christmas Eve something terrible happens – DP is lost. But Christmas Eve is a night for miracles and lost causes, a night when all things can come to life… even toys. And Jack’s newest toy – the Christmas Pig (DP’s replacement) – has a daring plan: Together they’ll embark on a magical journey to seek something lost, and to save the best friend Jack has ever known.
Ellie Berger, President, Scholastic Trade, said:
“Timeless, thrilling, and heartwarming, with masterful storytelling: The Christmas Pig is all of these and more. A gift for children and families alike, this story about the enduring power of love can be read together as a holiday tradition, and as a classic tale to be savored, any day of the year.”
The Christmas Pig continues J.K. Rowling’s brilliant return to publishing for children, following last year’s #1 New York Times bestselling fairy tale The Ickabog, which was serialized online for free for children in lockdown and then published with all her royalties donated to her charitable trust Volant to help vulnerable groups impacted by the Covid-19 pandemic.
The book will be published in hardcover, with full-color jacket and featuring nine black and white spreads and decorative inside art from acclaimed illustrator Jim Field. The jacket design will be revealed in the coming months.
About the author
J.K. Rowling is the author of the seven Harry Potter books, which have sold over 500 million copies, been translated into over 80 languages, and made into eight blockbuster films. She also wrote three short series companion volumes for charity, including Fantastic Beasts and Where to Find Them, which later became the inspiration for a new series of films.  Harry’s story as a grown-up was later continued in a stage play, Harry Potter and the Cursed Child, which J.K. Rowling wrote with playwright Jack Thorne and director John Tiffany.
In 2020, she returned to publishing for younger children with the fairy tale The Ickabog, which she initially published for free online for children in lockdown, later donating all her book royalties to help vulnerable groups affected by the Covid-19 pandemic.
J.K. Rowling has received many awards and honors for her writing, including for her detective series written under the name Robert Galbraith. She supports a wide number of humanitarian causes through her charitable trust Volant, and is the founder of the children’s care reform charity Lumos.
For as long as she can remember, J.K. Rowling wanted to be a writer. She lives in Scotland with her family.
About the illustrator
Jim Field is an award-winning illustrator, character designer, and animation director. He has worked on a wide variety of projects, from music videos and title sequences to advertising and books.
His first picture book, Cats Ahoy!, won the Booktrust Roald Dahl Funny Prize and was nominated for the Kate Greenaway award. Since then he has illustrated a string of bestselling, multi-award-winning children’s books, including Frog on a Log? and The Lion Inside, as well as young fiction series Rabbit & Bear, middle-grade novels by David Baddiel, and his debut author-illustrator picture book Monsieur Roscoe On Vacation, a bilingual book that introduces first French words. He grew up in Farnborough, UK, worked in London, and now lives in Paris with his wife and young daughter.