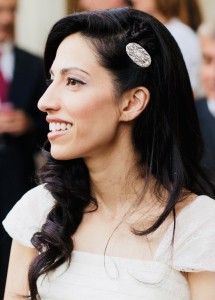 Both/And: A Life in Many Worlds will offer her inspiring story, coming of age as an American Muslim, the daughter of Indian and Pakistani scholars who split their time between Saudi Arabia, the United States, and the UK. Both/And grapples with family, legacy, identity, faith, marriage, and motherhood. It shares Huma Abedin’s personal accounts as a longtime aide to Hillary Clinton during Mrs. Clinton’s years as First Lady, U.S. Senator, a presidential candidate, Secretary of State, and Democratic Presidential Nominee, and a candid and moving reckoning of Ms. Abedin’s marriage to former Congressman Anthony Weiner.

“We knew Huma Abedin had a story to tell,” said Nan Graham, Senior Vice President and Publisher of Scribner. “We knew that in her compassion and courage, her resilience and grace, her work ethic and her mission, she is an inspiration to people of all ages. What we did not know is that she has a writer’s gift, a singular voice on the page. We are thrilled to be publishing this superb and significant memoir about the shaping of a character and the extraordinary worlds in which she has traveled.”

“For most of my life, I was viewed through the lens of others, a refraction of someone else’s pronoun. ‘They’ as in the parents who raised me; ‘she’ as in the woman I worked for; and ‘he’ as in the man I married,” said Huma Abedin. “Writing this book gave me the opportunity to reflect on my own life – from the nurturing family I was privileged to be born into, to working for one of the most compelling leaders of our time. This journey has led me through exhilarating milestones and devastating setbacks. I have walked both with great pride and in overwhelming shame. It is a life I am – more than anything – enormously grateful for and a story I look forward to sharing.”