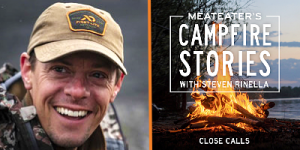 Penguin Random House Audio is publishing MEATEATER’S CAMPFIRE STORIES: Close Calls, an audiobook original with Steven Rinella, renowned outdoorsman, bestselling author, and host of the podcast and Netflix series, MeatEater. On sale from Random House Audio on July 20, the title features Rinella, members of the MeatEater crew, and various outdoor experts, sharing 16 true stories of close calls in the outdoors, from encounters with grizzlies, to getting swept away by an avalanche, to being trapped in an underwater cave, and even a brush with an armed cartel during a fishing trip.

“As Penguin Random House Audio expands our audio-first publishing, we’re thrilled to partner with Steven Rinella and the MeatEater Crew on this audiobook original that builds on the age-old tradition of stories told around the campfire. Listening to a great story, well told, has eternal appeal and this audiobook will be no exception, “says Amanda D’Acierno, President and Publisher, Penguin Random House Audio.

“Long before I took cameras along on hunts,” says Rinella, “I took a pen and waterproof notebook. It was writing about the outdoors that earned me my first career paycheck. All along, I’ve been fortunate to continue writing books with Random House, which isn’t just a publisher for me, but a home. So, I’m delighted to be publishing an audiobook original with the Penguin Random House Audio team. Anyone who likes a crazy story about the wild, fun, and sometimes harrowing things that happen in the outdoors is going to enjoy this one.”

This audiobook original is a new element to add to MeatEater’s many projects, among them books (which have sold over a million copies, including the New York Times bestseller, The MeatEater Guide to Wilderness Skills and Survival, published by Random House), television, six chart-topping podcasts, online videos and articles, and commerce business through owned-and-operated brands First Lite, FHF Gear, and Phelps Game Calls.