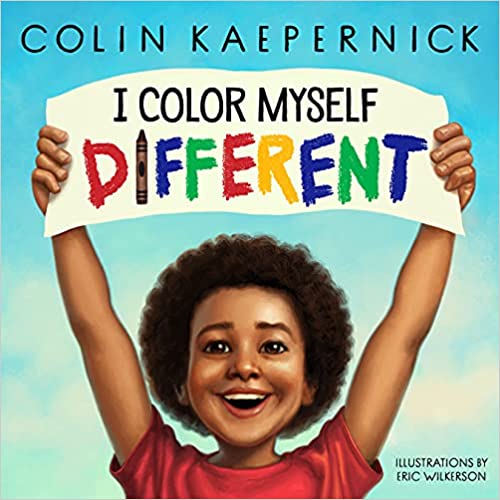 Colin Kaepernick, renowned activist, change-maker, and athlete, and Scholastic, the global children’s publishing, education, and media company, announce a multi-book publishing deal. Brokered in an exclusive offer from Kaepernick Publishing, the agreement includes World rights and all languages for both print and eBook formats. Andrea Davis Pinkney, VP and Executive Editor, Scholastic, will edit the first project, a picture book illustrated by Eric Wilkerson, to be published in April 2022.
“Colin’s reputation as a thought leader precedes him, but it was also clear when we met that his mission and purpose were very much aligned with Scholastic’s,” said Debra Dorfman, VP and Publisher, Scholastic Global Licensing, Brands & Media. “We knew instantly that we wanted to share his stories, which will be impactful messages of identity and belonging for Black and Brown children.”
On April 5, 2022, Scholastic will release I Color Myself Different, a picture book inspired by a significant childhood memory of when Kaepernick first documented that he was different from his adopted white family. During a kindergarten exercise on drawing families, Kaepernick remembers putting down the yellow crayon he had been using to draw his family and picking up the brown crayon for himself. This moment crystallized for him the differences marked by his adoption, and how acknowledging those distinctions could encourage us all to be more accepting of ourselves and each other.
“Colin Kaepernick’s inspiring story, with themes of identity, race, and self-esteem, will resonate deeply with all kids,” said Ellie Berger, President and Publisher, Scholastic Trade Publishing. “We are privileged to bring this work to young readers around the world for the very first time.”
“This story is deeply personal to me, and inspired by real events in my life. I hope that it honors the courage and bravery of young people everywhere by encouraging them to live with authenticity and purpose,” said Kaepernick. “I’m excited for Kaepernick Publishing to be collaborating with Scholastic on books with Black and Brown voices at the forefront.  I hope that our books will inspire readers to walk through the world with confidence, strength, and truth in all they do.”
Holder of the all-time NFL record for most rushing yards in a game by a quarterback, Colin Kaepernick took a knee during the playing of “The Star Spangled Banner” in 2016 to bring attention to systemic oppressions, specifically police terrorism against Black and Brown people. For his stance, he has been denied employment by the league. Since 2016, he has founded and helped fund three organizations—Know Your Rights Camp, Ra Vision Media, and Kaepernick Publishing—that together advance the liberation of Black and Brown people through storytelling, systems change, and political education. Kaepernick sits on Medium’s Board and is the winner of numerous prestigious honors including Amnesty International’s Ambassador of Conscience Award, the Robert F. Kennedy Human Rights Ripple of Hope honor, GQ magazine’s Citizen of the Year, the NFL’s Len Eshmont Award, the Sports Illustrated Muhammad Ali Legacy Award, the ACLU’s Eason Monroe Courageous Advocate Award, and the Puffin/Nation Institute’s Prize for Creative Citizenship.