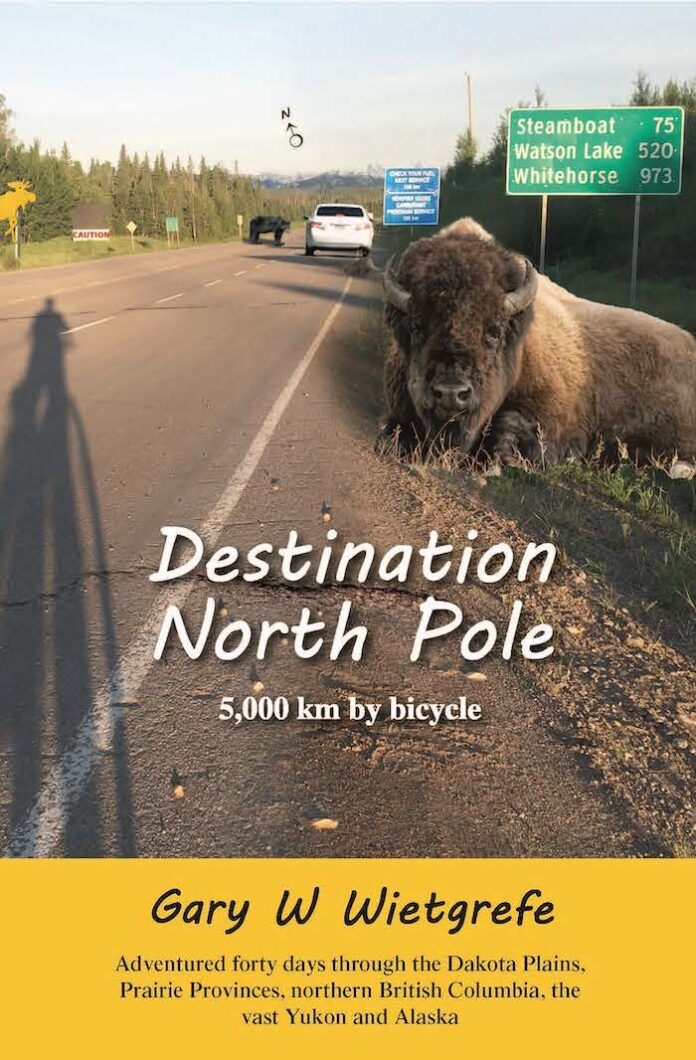 From the author of Destination North Pole, Gary Wietgrefe shares moments from his epic journey to the North Pole via……bicycle.

Ever travel 3,000 miles with someone using different modes of transportation and get there at the same time?

If not, pick some exotic place—maybe the Arctic Circle in summer. Drive an RV, vehicle or motorcycle. After blowing out sixty-five candles, try doing it on a bicycle. I did. My wife drove.

As senior pensioners, nature awakened history and our imagination. With nightly rendezvous, a love emerged from the flat Dakota Plains, Canada’s Prairie Provinces, British Columbia into the vast Yukon and Alaska.

To avoid sleeping on the ground, each day a motel, lodge, bed-and-breakfast, or cabin was found within cycling distance.

For two more hours I enjoyed the Yukon.

Most of the 4,500 kilometers (>2,800 miles) thus far had been in Canada. Departing early each morning, I biked until about noon without support. After a mid-day sandwich or snack, my wife searched ahead for shelter.

Lodging, especially in the Yukon, was unpredictable and scarce. Our last stop in Canada, was in a small village, Beaver Creek, Yukon Territory, internationally known for permafrost research. As she had done each night, my wife found another iconic resting place.

After leaving Buckshot Betty’s cabin where we stayed the night, I passed Canada’s custom station. Before officially leaving Canada or entering Alaska there was a two-hour bike ride through no-man’s-land. Except for the empty Alaska Highway, there are not roads through this forgotten, transcendent wilderness. Houses, utilities, and people do not exist.

Lucent ice-covered boreal forest ponds bordering the Alcan Highway freeze overnight and thaw during the day. Adapted to the struggles of life, underlaid by eons of permafrost covered glacial remnants, chlorophyl slows with dimness but does not stop greenery from rising to reproduce during night-less days.

After abandoning their claims in California and the Pacific Northwest in the mid-1800s, Russia sold their last North American holding, Alaska, to the United States. Gradually, the Brits relinquished control of their western territories to Canada.

Desolation exists. Not even the late nineteenth century gold rush impregnated this Yukon wilderness. It is virgin today.

With a sign, and nothing else, Alaska begins. Several miles later, through tree-covered hills, a United States custom station officially allows passage into Alaska.

From your armchair, enjoy Destination North Pole—5,000 km by bicycle or use it as a guide on your journey north. 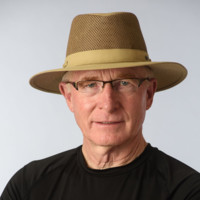 While on book tour, he turned sixty-five and decided to bicycle from their home in Pierre, South Dakota to North Pole, Alaska. Absorbed in nature forty days without music, radio nor earbuds, he averaged seventy-five miles-per-day for 3,000 miles, mostly through Canada which resulted in his first travelogue, Destination North Pole—5,000 km by bicycle.