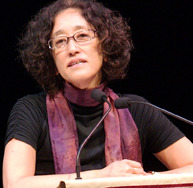 The National Book Foundation, presenter of the National Book Awards, today announced that it will award Karen Tei Yamashita with the 2021 Medal for Distinguished Contribution to American Letters (DCAL). Yamashita, whose I Hotel was a Finalist for the National Book Award for Fiction, is being honored for her expansive and innovative genre-defying oeuvre. She is the author of eight books, including Tropic of Orange, Letters to Memory, and most recently, Sansei and Sensibility, and numerous plays, selected and collected in Anime Wong: Fictions of Performance.

“A bold and groundbreaking writer, Yamashita’s deeply creative body of work has made an enduring impact on our literary landscape,” said David Steinberger, Chair of the Board of Directors of the National Book Foundation. “Whether it’s an evocative exploration of cities, collaborative performance productions, or connecting the plots of Jane Austen to Japanese American life, her work reaches across time, country, and culture to offer readers a powerfully complex guide to our world.”

Born in Oakland in 1951, Yamashita grew up in Los Angeles. After attending Carleton College and Waseda University in Tokyo, she studied the extensive history of Japanese immigration to Brazil, worked on translations and screenplays, and produced a number of dramatic works. Coffee House Press, a nonprofit independent press based in Minneapolis, published her first novel, Through the Arc of the Rain Forest, in 1991 and has published each of her books since. She currently serves as Professor Emerita at the University of California, Santa Cruz, where she has taught literature and creative writing since 1997.

“Through adept crafting, passionate research, and timely narratives, Yamashita defines, and re-defines, again and again, what storytelling can do,” said Ruth Dickey, Executive Director of the National Book Foundation. “In her books, she compels and challenges readers to engage with ideas, identities, and complicated worlds that mirror the complexity of life. We are honored to celebrate her extraordinary literary accomplishments and center her contributions to American culture.”

Yamashita is the thirty-fourth recipient of the National Book Foundation’s Medal for Distinguished Contribution to American Letters, which was created in 1988 to recognize a lifetime of literary achievement. Previous recipients include Walter Mosley, Edmund White, Isabel Allende, Annie Proulx, Robert A. Caro, John Ashbery, Judy Blume, Don DeLillo, Joan Didion, E.L. Doctorow, Maxine Hong Kingston, Stephen King, Ursula K. Le Guin, Elmore Leonard, Norman Mailer, Toni Morrison, and Adrienne Rich. Nominations for the DCAL medal are made by former National Book Award Winners, Finalists, judges, and other writers and literary professionals from around the country. The final selection is made by the National Book Foundation’s Board of Directors. Recipients of the Foundation’s Medal for Distinguished Contribution to American Letters receive $10,000 and a solid brass medal. The Foundation will later announce the presenter of the Award.

Karen Tei Yamashita is the internationally acclaimed author of eight books, all published by Coffee House Press, including I Hotel, Anime Wong, Sansei and Sensibility, and Through the Arc of the Rain Forest. In prose brimming with electric narrative energy, she employs humor, politics, sardonic wit, and lush polyvocality to invite readers into her nuanced but accessible literary worlds; her writing evinces a breathtaking capacity to transform conventions in genre, voice, intertextuality, and characterization, grounded in the skillful application of traditional literary techniques. She currently serves as Professor Emerita at the University of California, Santa Cruz, where she has taught literature and creative writing for many years.

In her various roles as a public intellectual—author, lecturer, teacher, mentor—Yamashita models a deep desire to understand and to embrace life as she finds it. Her narratives roam across three continents, drawing from personal history and the artistic, cultural, and historical cartographies of Asia, Britain and Europe, and the Americas. Her body of work has been credited with transforming the approach toward Asian American literary and cultural studies from one that is U.S.-centric to one that is hemispheric and transnational. Yamashita’s creativity and prescience—seen in her protean body of work—helped to bring about that sea change in American literature, too.

Yamashita was born on January 8, 1951, in Oakland, California, to Hiroshi John Yamashita and Asako Sakai, both survivors of incarceration at the Topaz internment camp during World War II. When she was a year old, Yamashita’s family moved to Los Angeles, where she grew up with her sister, Jane. Yamashita later attended Carleton College and studied at Waseda University in Tokyo, earning degrees in English and Japanese literature, and graduating Phi Beta Kappa.

After college, Yamashita was awarded a Thomas J. Watson Fellowship to travel to São Paulo for research on the extensive history of Japanese immigration to Brazil. There, Yamashita formed a study of Japanese Brazilian agricultural life, conducting interviews with Japanese immigrants, their descendants, and members of a commune. She remained in Brazil for a decade, during which she began writing fiction and plays, married Brazilian architect Ronaldo Lopes de Oliveira, and had two children, Jane and Jon. On her return to Los Angeles in 1984, Yamashita worked on translations and screenplays, and produced dramatic works such as Hannah Kusoh: An American Butoh, Tokyo Carmen vs. L.A. Carmen, and Noh Bozos, which she has linked to the content and style of her novel Tropic of Orange.

From 2012 to 2015, Yamashita was co-holder, with Bettina Aptheker, of the UC Presidential Chair in Feminist Critical Race and Ethnic Studies. In 2017, Yamashita delivered a keynote address at the inaugural Asian American Literature Festival, hosted by the Asian Pacific American Center, the Smithsonian, and the Library of Congress. In 2018, she received a VONA – Voices of Our Nations Arts Foundation Tribute, and in 2019, a John Dos Passos Prize for Literature. The Karen Tei Yamashita Papers, which archive and document her career, are housed at the McHenry Library at the University of California, Santa Cruz.

Karen Tei Yamashita’s work forges experience and imagination into exhilarating literary experiments both revolutionary and deeply tied to history. Drawing together matters artistic, intellectual, and political into some of the most innovative and adventurous literary art produced today, Yamashita has established herself as a leading voice in American letters. She lives in Santa Cruz, California, where she is working on Santa Cruz Nori—half original stories by Yamashita, half essays on the liminal, occupied lands of U.S. history, edited by Angie Sijun Lou—forthcoming from Coffee House Press.