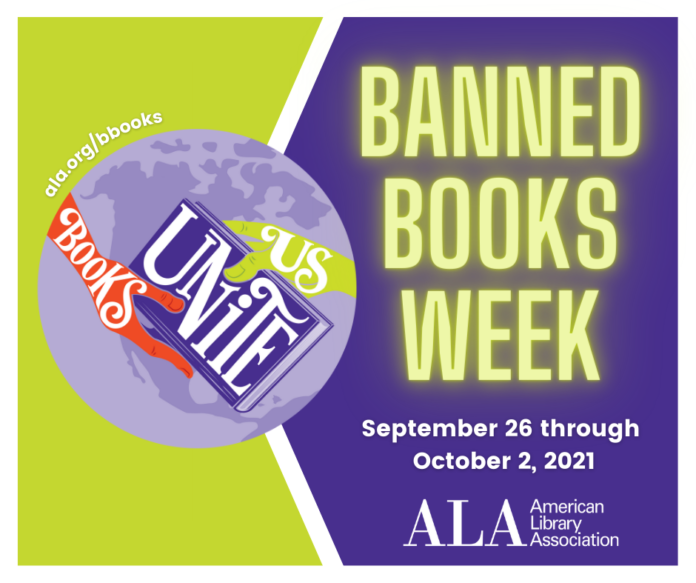 During Banned Books Week (Sept. 26 – Oct. 2, 2021), libraries, their users and readers everywhere are invited to celebrate and exercise their freedom to read with resources and events from the American Library Association (ALA).

Banned Books Week is an annual event that spotlights current and historical attempts to censor books in libraries and schools and brings together the entire book community in shared support of the freedom to seek and to express ideas, even ideas that contain uncomfortable truths.

This upcoming Banned Books Week aims to draw attention to the power of stories to unify us and the divisiveness of censorship.

ALA offers free promotional tools to raise awareness of this year’s theme “Books Unite Us. Censorship Divides Us.” Censorship infographics, cover photos, printable activities, and social media shareables are available on ala.org/bbooks. Libraries seeking to create their own promotional materials can purchase the Books Unite Us Poster File package on the ALA Store.

ALA also invites library workers and educators to host two programs at their own institutions. Dear Banned Author is a letter-writing program that encourages readers to tweet or write to their favorite banned authors. Printable postcards, author addresses and tips for hosting programs can be found on the ALA website. ALA also will continue to host the Stand for the Banned Read-out, where participants submit videos of themselves reading from banned and challenged titles. Video submissions will appear on the Banned Books Week YouTube channel.

Authors and leaders will discuss censorship at the Sept. 29 virtual event “Ideas & Action,” hosted by One World (an imprint of Random House), with co-sponsorship from ALA and partnership from BookPeople. Attendees will hear from authors who have faced censorship such as Ta-Nehisi Coates (“Between the World and Me”), Nikole Hannah-Jones (“The 1619 Project: A New Origin Story”), Ibram X. Kendi (“How to Be an Antiracist”), and Bryan Stevenson (“Just Mercy”) as they reflect on the question “What do you wish you had learned in school?” The event starts at 7 p.m. CT and registration is free.

Readers can also listen to stories and issues surrounding access to information in prisons. Restricted Reading is a new original series of short personal audio narrative produced by Kouvenda Media, with sponsorship from the Freedom to Read Foundation and support from the ALA Office for Intellectual Freedom (OIF). The series will be released on Sept. 27 and will examine the right to intellectual freedom for the more than 2.2 million people incarcerated in America today.

OIF has been collecting data about banned and challenged books since 1990 and compiles lists to inform the public about censorship efforts that affect libraries and schools.