Search
Home Blog BEHIND THE WORDS WITH HAYLEY KRISCHER 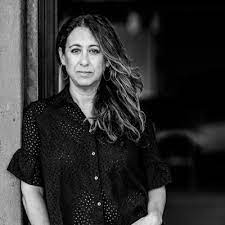 Hi Hayley, and welcome to Reader’s Entertainment! Let’s begin with where you’re from, where you live? Is writing your full-time job?

I live in New Jersey, about 20 minutes from where I grew up. Though I try to avoid that area because it makes me so sad. So much has changed since I grew up there. The old quarry that we used to hang out at when I was a teenager is now a 50+ retirement home! I try to find irony in it. As Nora Ephron said, “Everything is copy.” And yes, writing is my full-time job. I still write articles for the New York Times, I take on ghost writing projects and I’m always writing a story.

I’ve been writing for over 20 years, since I was in high school. My first journalism job was just out of college when I worked for a small local paper in New York City.

On a good day I can wake up early and write at around 7:30 am. I’ll try to push myself to write for at least three hours if I’m writing fiction. If I’m writing a new book (which I have been doing for the past three months), I’ll just keep writing. I don’t go back to look at anything or make edits. I just keep going. Visuals are a huge part of my writing process. So I’ll go through the internet and print out photos of people I think my characters look like. I’ll sometimes take pictures of places and areas. I’ll post the pictures on a Pinterest board but I’ll also thumb tack the pictures to a physical board. I place the board right in front of my desk so I can get that visual inspiration. I also like to make index cards as I’m plotting and re-plotting and re-plotting. I see some people do color coded tricks, but I’m just very simple in the way I put a book together. Sometimes I’ll put the index cards on a board, or sometimes I’ll fill my whole office floor with the cards. Reading is also a HUGE part of my writing day. I’m constantly flipping through new books and old books to study how other authors created a scene or a transition.

If I’m writing an article for someone and if I’m on deadline, then I work very differently. I research and write and edit all day long. I’m completely consumed. I don’t give myself any time to breathe. It’s such a different process.

How about a peek at your latest release?

THE FALLING GIRLS is about Shade and Jadis, who are inseparable best friends. They share clothes, they sleep in bed together, they share deodorant, underwear, toothbrushes and even give each other stick-and-poke tattoos. But when Shade decides that she wants to join the cheerleading time, Jadis takes it as a personal offense. She sees it as a betrayal. When Shade becomes drawn into the clique of insufferable cheerleaders, The Three Chloe’s, it puts an even deeper wedge between them. Then at the Homecoming dance, one of the cheerleaders dies and Shade can’t help but wonder if her best friend is behind it. And if Jadis has something to do with it, does it mean that she also is to blame? It’s a psychological thriller that is part Heathers, part Megan Abbott’s Dare Me, but it also really goes deep into the complexities of female friendships and what happens when you feel intoxicated by a new friend. Do you leave an old friend behind? Do you break up?

There is a scene early on in the book when Shade is breaking the news to Jadis that she’s going to join the cheerleading team. Jadis’s response is: “You don’t even know how to smile, Shade. Your mouth doesn’t work like that.” I was actually a cheerleader in high school. Not a very good one. I had the gymnastic skills like Shade, but was extremely shy and also very intent on keeping my “rebellious” reputation. So there was a huge dichotomy for me as a cheerleader. During the cheers I didn’t like, or the ones that embarrassed me, I refused to smile. My friends always made fun of me. My high school friends still do to this day! Once during a pep rally, a boy I had a huge crush on walked through the sea of kids and I thought, Oh my god, he’s going to kiss me or ask me out or something. Instead he said to me: “You couldn’t even smile once, could you?” I was devastated!

The hardest characters to write are the mean  girls, who are also the most fun to write. In SOMETHING HAPPENED TO ALI GREENLEAF that would be Blythe. And in THE FALLING GIRLS, that would be Chloe Orbach. I’m really drawn to flawed female characters. The darker they are, the more psychological damaged they are, the more inspired I am. I’ve had my own struggles with depression, but I think I also understand that we are all flawed. That we all make bad choices. That we all have ugly feelings. For me, it’s freeing to be able to put this in a book and to create scenes where my characters act out in really ugly ways. With that said, I also love these characters and understand them. I have empathy for them and who they are as people. They come to life for me and they’re my children in a way. So I want to make sure that even though they’ve done terrible things and have acted terribly, that the reader can see their human side. I’m fine with you coming away from my books feeling like you hate certain characters, but I also want readers to feel empathy for them as well.

I’ve been  deeply influenced by Megan Abbott. I think her exploration of teenage girls is just the best of the best. I also love Courtney Summers for this reason and Lorrie Moore whose short stories I go back to over and over.

I can do head stands and handstands! I think it’s so important to turn yourself upside down, literally and figuratively. Shake that brain up!

Pasta. Always pasta. During the pandemic, I made a different pasta dinner every night and it was the only thing that made me happy!

I’m kind of like Jack in The Shining. If you ask me how the writing is going, or if you interrupt me when I’m in a groove, I completely fall apart. It’s like that scene in The Shining. Wendy comes in to see how Jack’s writing is going and she innocently says: “Hi Honey! How’s it going?” She kisses him and she doesn’t mean any harm, but, oh my god, don’t ever ask a writer “How it’s going” or “Did you get a lot written today?” Writers are insecure by nature and this is the kind of question that absolutely breaks us.

Then Jack responds: “Whenever you come in here and interrupt me, you’re breaking my concentration. You’re distracting me! And then it’ll take time to get back to where I was!”

I have never related to anything more. It’s me. OK, I know he’s crazy and tries to murder his family. I know he could have said it in a much nicer way! But this is my Kryptonite. The Shining is one of my favorite movies. My husband and I watch it at least once a year, it’s so good and disturbing. But that scene always makes us laugh. I’m the cranky writer who can’t tolerate being disturbed.

Here’s a peek at THE FALLING GIRLS: 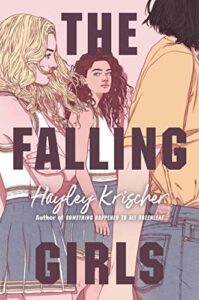 Shade and Jadis are everything to each other. They share clothes, toothbrushes, and even matching stick-and-poke tattoos. So when Shade unexpectedly joins the cheerleading team, Jadis can hardly recognize who her best friend is becoming.

Shade loves the idea of falling into a group of girls; she loves the discipline it takes to push her body to the limits alongside these athletes . Most of all, Shade finds herself drawn to The Three Chloes–the insufferable trio that rules the squad–including the enigmatic cheer captain whose dark side is as compelling as it is alarming.

Jadis won’t give Shade up so easily, though, and the pull between her old best friend and her new teammates takes a toll on Shade as she tries to forge her own path. So when one of the cheerleaders dies under mysterious circumstances, Shade is determined to get to the bottom of her death. Because she knows Jadis–and if her friend is responsible, doesn’t that mean she is, too?

Hayley Krischer is a writer and journalist. She is a regular contributor to The New York Times, where she covers women, teenage girls, celebrities, and cultural trends. Her work has also appeared in Marie Claire,The Atlantic, The New York Times Magazine, and more. Hayley is also the author of Something Happened to Ali Greenleaf. She lives in Glen Ridge, New Jersey, with her husband, two kids, one dog, and three cats.