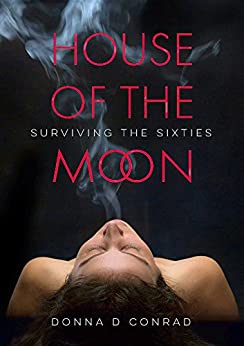 HOUSE OF THE MOON BY DONNA D. CONRAD

Covina, California, in the 1960s is a clean, white place to live just twenty-four miles east of Los Angeles. The maze of three-bedroom, two-bath housing tracts is the perfect place for a respectable undercover agent for the State, his wife, teenage son, and two daughters. But beneath the veneer of normalcy lies the truth of a violent, psychopathic father, an alcoholic wife, their pacifist son who is sent to war, and their two daughters—prime candidates for a cultural revolution that is gathering recruits with every toke.

House of the Moon is a haunting and ultimately triumphant memoir about coming of age during the decade that changed the world. With an unflinching voice, Donna Conrad chronicles her teenage years through lyrical vignettes. From encounters with Jim Morrison, Jimi Hendrix, and other legends of rock ‘n roll, to loaded shotguns at home, sexual violence in the streets, and flying high on drugs just to get by—this fast-paced memoir brings to life her quest to change the world—only to find herself changed by the times. 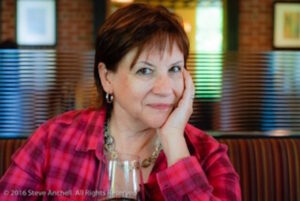 DONNA CONRAD is an award-winning author, journalist, activists, and teacher. Her core values revolve around individual empowerment, a sustaining ideal running through the books she writes, as well as her varied interest in the arts and sciences. Her memoir, House of the Moon; Surviving the Sixties has received critical acclaim. The first of her four-book historical fiction series, The Last Magdalene, is scheduled for publication April 2022. She is represented by Creative Edge Publicity.