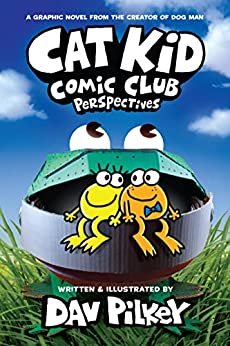 “Cat Kid Comic Club: On Purpose” to be Released Worldwide On April 5, 2022

Scholastic, the global children’s publishing, education and media company, today announced that it will publish Cat Kid Comic Club: On Purpose, an all-new title in the #1 New York Times bestselling and acclaimed Cat Kid Comic Club graphic novel series, a spin-off to the global publishing phenomenon Dog Man by Dav Pilkey. Cat Kid Comic Club: On Purpose will be published simultaneously in hardcover and ebook on April 5, 2022 in the U.S., Canada, U.K., Australia and New Zealand, and will follow the publication of Cat Kid Comic Club: Perspectives released this week.
Cat Kid Comic Club launched last year to multiple starred reviews with Publishers Weekly praising it as “Irreverent, laugh-out-loud funny and—gosh darn it—downright moving, it’s a heartfelt celebration of coming into one’s own as an artist, with all its frustrations and joys.” School Library Journal, also in a starred review, raved that Cat Kid Comic Club is “Colorful, compelling, and laugh-out-loud funny. Every elementary school library needs this graphic novel.” The launch of Cat Kid Comic Club marked Dav Pilkey’s 34 years of publishing bestselling and award-winning books for children. His first graphic novel, The Adventures of Super Diaper Baby, was published in 2002, fourteen years before the release of the first Dog Man graphic novel.
Pushing the boundaries of visual storytelling in Cat Kid Comic Club, Dav Pilkey uses a variety of techniques to illustrate each of his character’s art styles including photography, paper models, poetry, clay, collage, calligraphy, gouache, watercolors, and more. Paired with Pilkey’s trademark humor and heart, this mixed media approach to storytelling is exemplified in the “mini-comics” in each of the Cat Kid Comic Club books. In the first Cat Kid Comic Club book (published December 1, 2020) readers got to see the progress, mistakes, and improvements that come with practice and persistence. In Cat Kid Comic Club: Perspectives (November 30, 2021), the characters have different ways of seeing the world and discover new ways to collaborate and see one another’s points of view. In the forthcoming Cat Kid Comic Club: On Purpose (April 5, 2022), Pilkey’s characters are each trying to find their creative path as they face rejection time and time again.
Dav Pilkey, a Caldecott Honor-winning artist, has been working on the Cat Kid Comic Club books in his studio in Japan since the pandemic began, said: “With the Cat Kid Comic Club series, my hope is that kids find joy in reading, appreciate different ways of thinking, and find their purpose as they dream up their own stories.”
Ellie Berger, President of Scholastic Trade, said: “Dav Pilkey’s books explore themes with universal resonance including friendship, family, empathy, creativity, and imagination. As his longtime publisher, we have witnessed Dav’s amazing ability to engage kids for more than thirty years, and today we are thrilled to see the anticipation and excitement that his Dog Man and Cat Kid Comic Club books bring to children, parents, educators, and booksellers worldwide.”
Pilkey’s mega-bestselling Dog Man series launched to multiple starred reviews in Fall 2016. Five years later, the Dog Man series has more than 40 million copies in print to date with translations in 42 languages. DreamWorks Animation is currently developing a feature film adaptation of Pilkey’s popular canine superhero. All ten books in the Dog Man series published to date have clinched the #1 overall spot on renowned bestseller lists. According to NPD which tracks approximately 85% of consumer sales, more than 1.1 million copies of Dav Pilkey’s Dog Man: Mothering Heights have sold to date since its publication in March 2021, and as covered in Publishers Weekly, “…Pilkey’s work accounts for 30% of the graphic and comics sales this year and 50% of the growth, as well 56% of middle grade sales.”
About Dav Pilkey
Dav Pilkey began his career in 1987 as a picture book author and illustrator. He was awarded a Caldecott Honor in 1997 for his picture book The Paperboy. His many acclaimed picture books include God Bless the Gargoyles, T’was the Night Before Thanksgiving, The Hallo-Wiener, Dog Breath, and One Today written by presidential inaugural poet Richard Blanco. When Dav Pilkey was a kid, he was diagnosed with ADHD and dyslexia. He was so disruptive in class that his teachers made him sit out in the hallway every day. He loved to draw and make up stories and spent his time in the hallway creating his own original comic books—the very first adventures of Dog Man and Captain Underpants. Pilkey’s Captain Underpants series, launched more than twenty years ago, has more than 90 million copies in print, translated in 43 languages, and released as a feature film by DreamWorks Animation as well as an original series on Netflix. For more information about Dav Pilkey and his books, visit http://mediaroom.scholastic.com/davpilkey