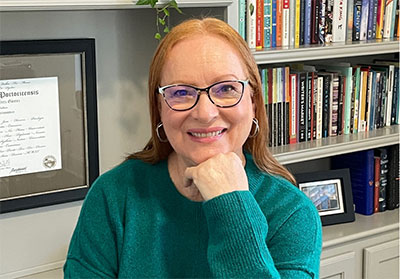 Elba Iris Pérez is a writer from Río Grande, Puerto Rico. She spent her early childhood in the company town of Woronoco, Massachusetts, and returned to Puerto Rico at the age of twelve. In 2002, when she visited Woronoco and found that the company town had been torn down, she was inspired to write about the Puerto Rican families who once lived there.

As a tenured professor at the University of Puerto Rico in Arecibo, she taught Western Culture and Theatre. She is the founder of a student theatre group at UPRA, Teatro Universitario de Histriones, and a community theatre group, Taller de Teatro del Tanamá. Elba, who was a mime in Teatro Ikaro (the Sir Icarus Circus) for four years, is the author of El Teatro Como Bandera, a history of street theatre in Puerto Rico, published in 2010 by Centro de Estudios Iberoamericanos, UPRA & Librería La Tertulia.