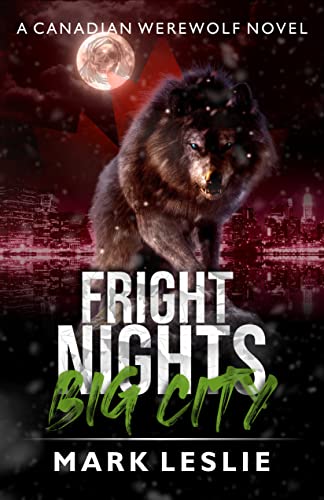 Fright Nights, Big City by Mark Leslie
Canadian author Mark Leslie is a writer, editor, and bookseller whose publications include poetry, short stories and novels – both fiction and non-fiction. His specialty is horror, ghost, and eerie stories, and as such he has served as editor of science fiction anthologies (North of Infinity II, Campus Chills, Fiction River among them). In 2016 Mark introduced the primary character of his Canadian Werewolf Series, of which FRIGHT NIGHTS, BIG CITY is Book 4, outlining him as ‘Michael Andrews seems to have it all. He’s a successful author and a minor celebrity living in Manhattan. It’s a pretty big step up from his humble Canadian upbringing. Of course, his lycanthropy poses a bit of a challenge.’ For those in doubt, a lycanthrope is a human with the ability to shapeshift into a wolf – aka ‘werewolf.’ Mark adds that Michael Andrews is ‘a meek and mild-mannered person, not cut out for the hero life – an Alpha Wolf who is really a Beta Human.’Given that character build up, Mark opens his story with a Prologue that captures his character well – ‘I was used to waking up naked in strange places with foggy memories of what I’d done the night before when romping around as a canine. It’s amazing how accustomed one can become to the strangest things. But those odd moments, the things we never thought we’d get used to, over time, evolve into habits, rituals. They might even become comforting in a bizarre way. This time I woke in a sitting position…When the moon is at 80% or more, my body undergoes a metamorphosis from a six foot-two two-hundred-pound male Homo sapiens into a six-foot long anis lupus.’

On to the story – ‘Stop spreading the news. There’s no leaving today. Not when the Big Apple comes under attack from an infectious worm threatening to rot it, and the entire nation, to the core. Michael Andrews thought he’d found the perfect woman. A companion whose own powers neutralize his werewolf curse and bring the balance he has always wanted. But his plans on settling down and giving up the vigilante lifestyle are fleeting. The hatred, the fear, and the monstrous attacks on innocent civilians grow and spread as supernatural monsters roam the city streets at night. The neo-Nazi Proud Fighters for America have already seeped their way across the continent and have nefarious plans for the city that never sleeps. With Michael’s powers nullified in Lex’s presence, the couple is forced to divide in their attempt to conquer, and Michael turns to his ex-girlfriend’s knowledge of the occult and an ally he thought was his enemy to fight this rising evil. But will three supernatural humans and one paranormal scholar be enough to vanquish the growing legion of evil?.’

Mark Leslie’s tongue in cheek wit shines through his tale, giving a bonding sense of pleasure in getting to know – and follow – his central character through his antics. This is a gratifying story on many levels, one that deserves a wide audience. Highly recommended. Grady Harp Reviews