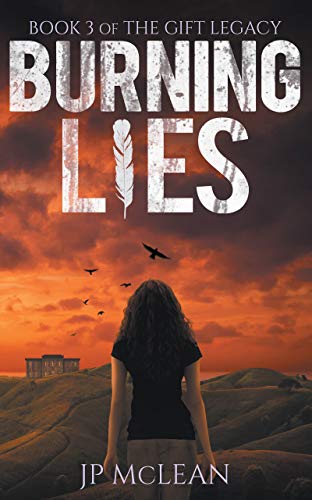 After uncovering a hidden ability of her own and discovering the dark origins of her gifts, Emelynn uncovers a conspiracy to expose her and her people’s gifts to the world, forcing her to face her worst fears head-on in author J.P. McLean’s “Burning Lies”, the explosive third novel in The Gift Legacy series!

A dishonourable legacy. A powerful enemy. A future threatened.

While recovering from a psychopath’s savage attack, Emelynn Taylor learns the ugly truth: deceit spawned her gift of flight, and ruthless brutality safeguards it.

But knowing the truth doesn’t prepare Emelynn for the terrorist who rips her world apart. And when the escalating violence spreads to the inner circle of her covert community, Emelynn uncovers a conspiracy that threatens to expose the gift and all those who share it.

Emelynn joins forces with a man she doesn’t trust and a family she doesn’t know to fight a menace that cloaks itself in lies. And when she lands at the feet of a dangerous enemy, Emelynn must face her worst fears to save the people she loves—and she must do it alone.

The third book in The Gift Legacy series, Burning Lies is a thriller that skirts the edges of reality in a world within our own. Step inside and escape the ordinary: take flight with Emelynn Taylor.

Burning Lies was previously published as The Gift: Redemption

This was a truly captivating and entertaining read. The author always does such an incredible job of crafting a narrative that allows readers to pick up on the important plot points and themes found in previous entries of the series without it feeling like a full recap of the series overall. It felt natural and flowed smoothly, and allowed for the character’s evolution and the mystery unfolding within the narrative to come alive.

The evolution of these characters was so mesmerizing. Emelynn’s journey from the previous book sees her recovering both physically and mentally from the abduction and torture she endured at the hands of a madman and his team, and her story of confronting that trauma and learning to take back the power that had been lost during that harrowing time was so important both to the story and to the overall theme of the violence women face far too often in today’s world. The gripping way that readers are on the edge of their seats trying to understand who can be trusted and who cannot is what makes this story shine, as you spend most of the time trying to figure out if you should hate or love a character, (except Manse, who everyone just hates).

A powerful, engaging, and character-driven narrative, author J.P. McLean’s “Burning Lies” is a must-read novel! The paranormal/fantasy-driven thriller is the perfect next chapter in this ever-growing series, and the twists and turns the narrative takes not only enhance the growing mythos of the Fliers and those around them but Em’s own past and her connection to the family she’s lost over time. It’s an emotional experience as well as action-packed, so be sure to grab your copy today!