Search
Home Blog BLACKSAD IS BACK IN ACTION! 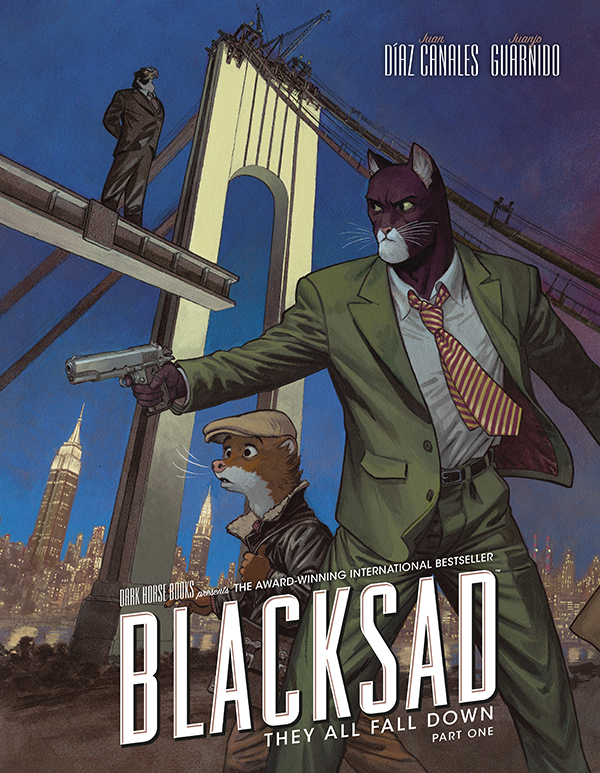 Acclaimed creators Juan Díaz Canales and Juanjo Guarnido present the long-awaited return of hardboiled feline P.I. John Blacksad in a brand-new, two-part storyline. Blacksad: They All Fall Down • Part One will be published in English by Dark Horse in July 2022, following its initial publication by Dargaud and Europe Comics in 2021—the French edition of which has been nominated for the Angoulême Grand Prix award. Translated by Diana Schutz and Brandon Kander, and lettered by Tom Orzechowski and Lois Athena Buhalis, Dark Horse is proud to present this noir masterpiece to North American audiences—the first new Blacksad volume in seven years.

In Blacksad: They All Fall Down • Part One, Detective Blacksad deals with the mob, the unions, and mid-century “master builder” Lewis Solomon, who plans to pave over New York City’s green spaces, come hell or high water. While Blacksad must navigate from the lofty world of 1950s theater all the way to the city’s seedy depths, Solomon looms above it all in pursuit of his own dreams—but is the cost too high? Meanwhile, Weekly finds himself in the hot seat just as an old flame comes back to burn his pal Blacksad!

Blacksad: They All Fall Down • Part One will be published in hardcover at a retail price of $19.99. The book arrives in comic shops on July 6, 2022, followed by bookstores on July 19, 2022. It is now available to pre-order through Amazon, Barnes and Noble, and your local comic shop.

Blacksad: They All Fall Down • Part One joins the previously published volumes of the beloved Blacksad series, including Blacksad HC (collecting the first three albums, Somewhere Between the Shadows, Arctic Nation, and Red Soul), Blacksad: A Silent Hell HC, and Blacksad: Amarillo HC.

Praise and Awards for Blacksad:

“Grade A. Feels like the unearthed film-noir storyboards of a master.” –Entertainment Weekly

“Brilliant art and an unusual display of anthropomorphic realism.” –Will Eisner