Search
Home Blog BEHIND THE WORDS WITH DEBORAH FALAYE 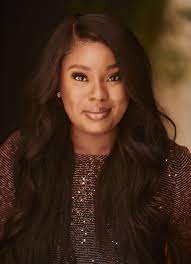 Today, we welcome Deborah Falaye to our blog. For a look at Deborah’s latest release BLOOD SCION follow this link to our Sneak Peek!

We’re excited to have you on Reader’s Entertainment, Deborah.

Hi, thank you so much for having me!

Let’s begin with where you’re from, where you live? Is writing your full-time job?

I grew up in Lagos, Nigeria until the age of twelve, when my family and I moved to Canada. I now live in Toronto with my husband and our nine-year-old Yorkie, Major. I absolutely love reality TV, and I’ve probably seen every single show on Bravo—that’s how obsessed I am. And yes, I’ve been very fortunate to have the opportunity to write full-time!

My love for the written word really began in my childhood. I remember filling the pages of my first diary with stories about Yoruba princesses and goddesses, and as I got older, I began to write poetry and a few short stories. It wasn’t until 2008 that I finally decided to try writing a full-length book, which ended up being my first shelved manuscript.

Give us a peek at your typical writing day.

I’m very much a slow writer, so I tend to need more hours in the day to write. Since writing is what I do full-time, that means I get up, feed my dog, have breakfast, and I’m usually ready to write before noon. On a typical day, I try to commit roughly 7-8 hours to writing, but I find those hours tend to double when I’m on deadline.

BLOOD SCION is a YA Fantasy inspired by both Yoruba-Nigerian mythology and the war on children. The story follows Sloane, a young girl descended from the Orisha gods, who, on her fifteenth birthday, gets drafted into the very military that has hunted her kind for centuries. She will do anything to survive her training and destroy the army from within—even if it means becoming the very monster she hates. BLOOD SCION is a story about magic, injustice, power and vengeance, and how far one girl will go to reclaim everything that has been stolen from her and her people. It’s very much Hunger Games meets Black Panther meets Beasts of No Nation, with a healthy dose of magic.

My Yoruba culture was the first spark of inspiration. I grew up listening to stories about the Orisha gods and goddesses from my grandmother, and I carried that fascination with me for years. So when I started drafting Blood Scion in 2012, I knew immediately that I wanted to ground it in that same culture and mythology, especially at a time when there weren’t any stories inspired by non-western mythology and settings. The second inspiration came in 2014, when hundreds of young girls were abducted from a school in Nigeria, which sparked the global hashtag campaign known as #BringBackOurGirls. It was truly heart breaking for me to learn about the horrors these girls endured, and for months after that, I started researching about the child soldiers and the war on children—all of which inspired the world and conflict within Blood Scion.

A lot of people don’t know this, but the Lucis bloodlines were named after stars and constellations. I thought it would be a really fun addition to the story because the word Lucis means ‘Light.’ Also, a big part of the bloodlines’ ideology was that they really saw themselves as stars and believed they were far more superior and advanced compared to the Scions. So I wanted to play around with that reference when giving meaning to their names.

There’s a moment in the story when Sloane gets a chance to save a fellow recruit from a very traumatic situation. The bond that was shared between both characters in that moment was so powerful and cathartic that I actually cried while writing the scene. It was definitely one of the most difficult parts of the book to write, but also one of my absolute favorites.

Oh, that has to be my main character, Sloane. When I first started brainstorming Blood Scion in 2012, I thought I knew who her character was: I saw her more as a typical hero fighting for what she believed in. But the more I discovered about her and her journey, it became clear that she was this incredibly morally grey character who was willing to do whatever it took to get what she wanted. And that was difficult to wrap my head around at first, because back then, female characters weren’t really allowed enough room to have flaws and to make mistakes. So the fact that I was writing this angry and vengeful character—I definitely struggled with how she would be received by readers in the beginning. But in the end, I knew it was more important for me to stay true to her character and who she was, flaws and all. And I’m so glad I did because I couldn’t imagine Sloane’s character and her story any other way.

What particular authors that have influenced you?

I grew up devouring stories by Chinua Achebe and Wole Soyinka, and really any African literature I could get my hands on. These books not only offered me the kind of escape I craved as a child, they also inspired me to want to create stories of my own. Chinua Achebe’s Things Fall Apart was one of the first books I read that also inspired Blood Scion— especially with how the themes of colonization and its impact on culture and identity were explored.

I’m a huge fan of coffee, especially when I’m on deadlines. I also really love a good glass of red wine, and I couldn’t imagine ever giving that up.

I can’t write without music, so my Spotify playlist is so important for me. I spend a lot of time curating my book’s playlist, and with Blood Scion specifically, I have over 400 songs that I’ve collected over the years. I find that the music helps me get in the right head space to draft, so it’s definitely a necessity. 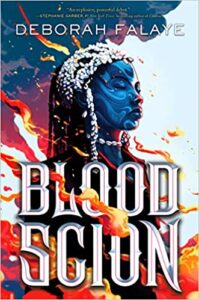 Oh, I love the mythology of the constellations…..thank you so much for joining us today.

To learn more about Deborah and her books, visit her website.