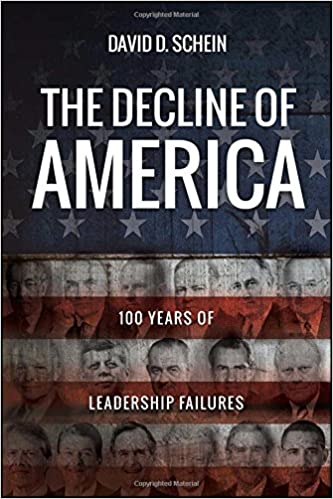 The Decline of America: 100 Years of Leadership Failures BY David D. Schein

Texas author David D Schein is the Director of Graduate Programs and the Endowed Chair of Management and Marketing at the University of St. Thomas’ Cameron School of Business in Houston, Texas. He is also the President of a human resources consulting firm – Claremont Management Grope – and is a popular public speaker. He has published tow books to date – BAD DEAL FOR AMERICA and THE DECLINE OF AMERICA.

THE DECLINE OF AMERICA was first published in 2018: with the current bipartite rhetoric about the schism the 2020 Presidential election continuing to gush through social media and political bickering, including the never ending trauma fallout of the January 6 insurrection, the timing of this retrospective survey of the last 100 years of presidents is welcome. As Schein states in his introductory comments, ‘A special effort has been made to create a book that is as nonpartisan as possible. There is plenty of blame to share wit both major political parties around the United States. In addition to my own diverse background, the contents have been assembled using a variety of sources. In some cases, there is more objective material today than there was in the past. Documents that were classified as confidential have been declassified. Deathbed memoirs shed new light on past presidents. I tried to use the most authoritative studies and statistical data. I utilized well-established publications and outlets over sources that are generally regarded as being “far left” or “far right.” …The focus of this book on presidential leadership is about short-term and long-term results of their time in office….Leadership decisions have led to the decline of America.’

Given that premise, Schein details the presidential terms from Woodrow Wilson though Harding, Coolidge, Hoover, FDR, Truman, Eisenhower, Kennedy, Johnson, Nixon, Ford, Carter, Reagan, both Bushes, Clinton, to Obama. The positive and negative aspects of each administration are discussed with an emphasis on the errors uncovered – or better delineated. In closing he mentions Trump – ‘The election of Donald Trump, even though he ran as a Republican, is a repudiation of much of the traditional party structure of the Democrat and Republican parties.’ It is Schein’s desire to allow better information about the past presidencies inform us about the need for change and for creating stronger leaders. As he closes, Schein states, The US needs to do a far better job of managing its economy. The federal, state, and local governments are broken and a new approach to political leadership must develop or the country will continue on its path to failure.’ Disturbing, but important views to consider. Grady Harp Review.