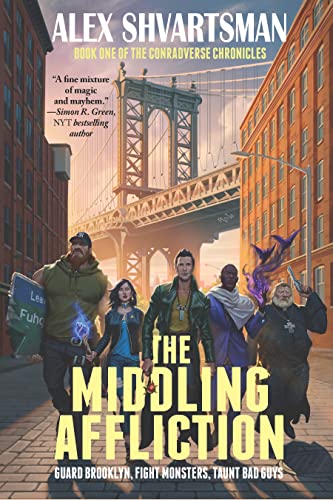 THE MIDDLING AFFLICTION By Alex Shvartsman

‘If it isn’t too much of an inconvenience, I’d like you to save the world’

New York author Alex Shvartzman is a writer, editor, and translator who has published his short stories in such magazines and anthologies as Nature, Analog, Strange Horizons, having been awarded the WSFA Small Press Award for Short Fiction. He is the editor of Unidentified Funny Objects and Future Science Fiction Digest among others such as Humanity 2.0, and Coffee: 14 Caffeinated Tales of the Fantastic.

One of the many reasons Alex’s writing is so magnetic is his astute grasp of melding science fiction fantasy with very ‘now’ pop culture idioms that provide instant checkpoint for the YA crowd (and adults whose gamut of literary genres include appreciation of weird fantasy!). He zings the opening of this wild ride as follows: ’My job that morning was to banish a demon, but I was determined to finish my cup of coffee first. I sipped my java in front of Demetrios’s warehouse in Sunset Park, enjoying the panoramic view of the Manhattan skyline and New York harbor. I stared at the Statue of Liberty, which appeared the size and shade of a toy soldier at this distance. A warm breeze caressed my face. Next to me, Demetrios was shaking like a leaf. “What in the world are you thinking. Conrad?” Demetrios spoke in his typical rapid-fire fashion. “You’re just going to go in there, alone, to face this infernal thing?”….”I can handle it…it’s not like I haven’t dealt with an occasional demon before..’Jocular conversations lighten the following tale.

The scope of the story is as follows: ‘Conrad Brent protects the people of Brooklyn from monsters and magical threats. The snarky, wisecracking guardian also has a dangerous secret: he’s one in a million – literally. Magical ability comes to about one in every 30,000 and can manifest at any age. Conrad is rarer than this, however. He’s a middling, one of the half-gifted and totally despised. Most of the gifted community feels that middlings should be instantly killed. The few who don’t flat out hate them still aren’t excited to be around middlings. Meaning Conrad can’t tell anyone, not even his best friends, what he really is. Conrad hides in plain sight by being a part of the volunteer Watch, those magically gifted who protect their cities from dangerous, arcane threats. And, to pay the bills, Conrad moonlights as a private detective and monster hunter for the gifted community. Which helps him keep up his personal fiction – that he’s a magical version of Batman. Conrad does both jobs thanks to charms, artifacts, and his wits, along with copious amounts of coffee. But little does he know that events are about to change his life… forever. When Conrad discovers the Traveling Fair auction house has another middling who’s just manifested her so-called powers on the auction block, he’s determined to save her, regardless of risk. But what he finds out while doing so is even worse – the winning bidder works for a company that’s just created the most dangerous chemical weapon to ever hit the magical community. Before Conrad can convince anyone at the Watch of the danger, he’s exposed for what he really is. Now, stripped of rank, magical objects, friends and allies, Conrad has to try to save the world with only his wits. Thankfully though, no one’s taken away his coffee.’

For a completely enjoyable fantasy this novel satisfies on all counts. Exceptional writing and a bristling imagination bring Alex Shvartzman to the forefront! Very Highly Recommended