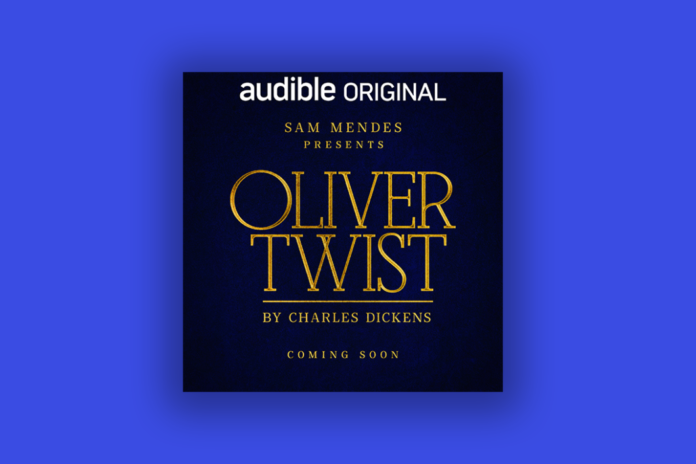 Audible has today announced an exclusive deal with Sam Mendes (1917, American Beauty), which will see the Oscar-winning director executive produce audio dramas of three of Dickens’ best-loved titles, brought to life by all-star British casts. The first installment in the collection will be a reimagining of Oliver Twist, released exclusively on Audible in November 2022, with a further two titles to follow in 2023.

The ambitious series will be released globally by Audible and is being recorded in Audible’s state-of-the-art studio in the heart of London, bringing the sounds of the capital that inspired Dickens’ masterpieces to the fully dramatized productions using Dolby Atmos sound.

Audible’s London studios are situated in the heart of the city, moments away from many of the locations described in Dickens’ Oliver Twist. Fagin’s den, where Oliver and the other members of Fagin’s gang live, is in Saffron Hill, near the studios. Jacob’s Island, the notorious slum of Victorian London and the setting of the climax of the story, is just a walk from where the actors have been bringing these very scenes to life. Elsewhere, Foley recordings will be captured on location in Rotherhithe, in and around an old pub that dates back to Dickens’ era.

This production of Oliver Twist will be brought to life by an all-star and diverse British cast to be announced later in the year.

Sam Mendes said: “The London headquarters of Audible sit on the very streets where Charles Dickens walked, and from which he drew many of his astonishing array of characters. It seems like a perfect marriage – the most prolific storytellers of our age, with the greatest storyteller of all time. I’m delighted to be working with Audible to bring some of my favorite Dickens novels to life, using the vibrant sounds of London to create an immersive sense of the city, and a fantastic collection of actors to create the timeless characters who inhabit it. This will truly be a cinema for the ears – a chance to experience the extraordinary and kaleidoscopic world of Dickens in a whole new way.”

Aurelie De Troyer, Senior Vice President of International English Content at Audible commented: “It is an honor to collaborate with Sam Mendes on his audio debut. The casting is extraordinary and we cannot wait for him to bring his celebrated style to three much beloved Dickens classics. Oliver Twist, the first title releasing later this year, is sure to be an epic family audio listening event for the holidays.”

Sir Sam Mendes is an award-winning director, known for his acclaimed work on films such as Skyfall, Revolutionary Road, 1917, Road to Perdition and Jarhead. His work in theatre, directing plays including The Ferryman, The Lehman Trilogy and Company on the West End and Broadway has seen him awarded three Laurence Olivier Awards and two Tony Awards for Best Direction of a Play.