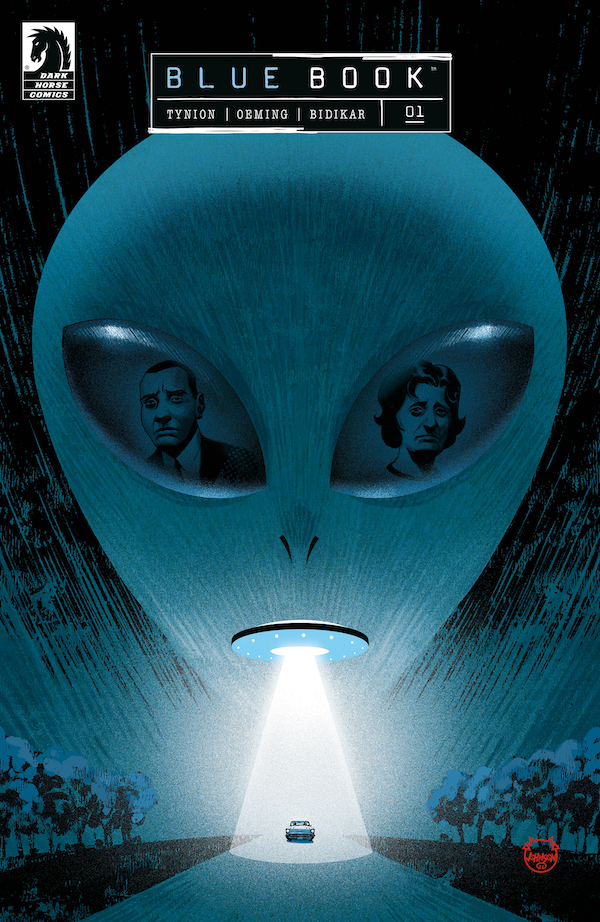 James Tynion IV has always been fascinated by horror and what he calls “true weird,” or the cousin to true crime—strange and unusual events like supernatural and alien encounters—especially after publishing stories like Something is Killing the Children, The Nice House on the Lake, and The Department of Truth. Now, Tynion, Tiny Onion Studios, and Dark Horse Comics are teaming up to bring deeply weird non-fiction and high concept coming-of-age monster stories to print in a new line! Featuring new and previously published creator-owned work from the mind of James Tynion IV, the new line begins with Blue Book in February 2023 and The Oddly Pedestrian Life of Christopher Chaos in June 2023. Both were originally published on Substack, but will soon be available in print for the first time.

In Blue Book, Tynion explores strange but true stories of aliens and the supernatural. The first series details Betty and Barney Hill’s abduction encounter, also known as the first widely-publicized abduction that went on to shape and influence all future encounter stories. Teaming up with Tynion on this tale are artist Michael Avon Oeming and letterer Aditya Bidikar. Included at the end of every issue will be a short comic called “True Weird,” the first of which is called True Weird: Coney Island by Tynion, Klaus Janson, and Bidikar.

The next series to be published will be The Oddly Pedestrian Life of Christopher Chaos, an LGBTQ+ horror-hero coming-of-age series that’s Invincible meets Doom Patrol. The concept was created by James Tynion IV and written by Tate Brombal (House of Slaughter) with art by Isaac Goodhart, colors by Kurt Michael Russell, and letters by Aditya Bidikar.

The Oddly Pedestrian Life of Christopher Chaos focuses on the lonely teenage mad scientist, Christopher Chaos. When the cute boy at high school turns out to be a deadly creature, Christopher finds himself pitted in a world of monsters, heroes, and a cult of hunters out to kill them all.

Be sure to follow Dark Horse Comics on social media for more news, announcements, and updates!

“It’s this tension between love and cruelty, friendship and betrayal that drives so much of the drama, mystery, and appeal of The Nice House on the Lake and secures it as one of the most remarkable comic series of 2022.” –Polygon

“It’s [The Department of Truth] raw and achingly exposed, a vulnerable soft spot that makes every page feel like a fresh punch on top of an old bruise.” –The A.V. Club

“Something is Killing the Children is a great story being told with incredible writing and beautiful, haunting artwork. It is everything I want from a horror comic book.” –Comicbook.com