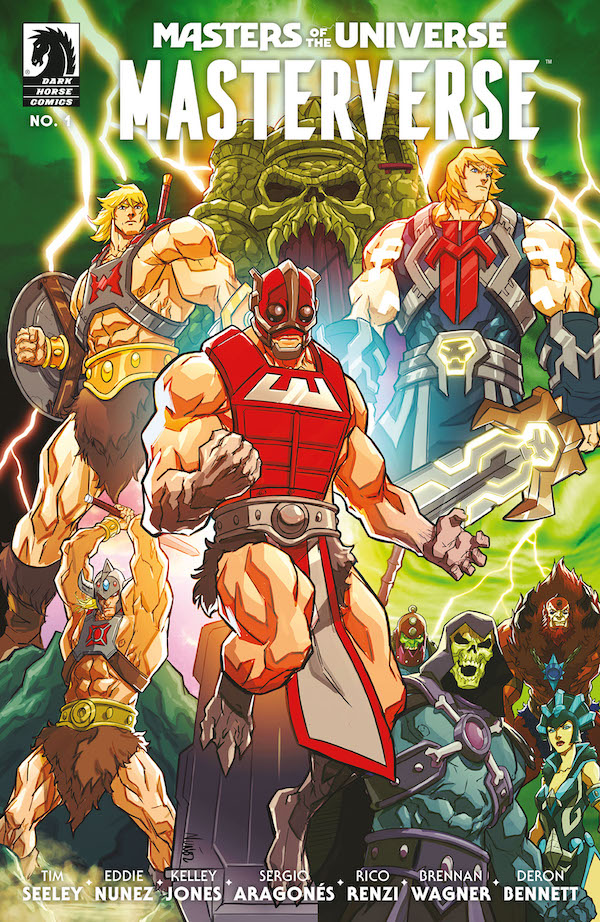 In the depths of Castle Grayskull, The Sorceress and Zodac debate the value of He-Man. To save the life of her champion, the Sorceress must take the Cosmic Enforcer on a tour of the multiverse. First, a tour across a world where a dim, barbaric He-Man bumbles through a world of annoying warrior goddesses and bored demons as he’s pursued by a hungry green tiger in a tale drawn by the legendary Sergio Aragonés (Groo the Wanderer, Mad Magazine)! Then, a stop in an Eternia where the power of Grayskull summons an entirely different warrior in a horrific ghost story illustrated by Kelley Jones! Written by MotU alumni Tim Seeley with a framing story by Eddie Nuñez, this is an anthology series not to be missed!

Masters of the Universe: Masterverse #1 (of 4) will be available starting February 15, 2023 and is now available for pre-order at your local comic shop.

Be sure to follow Dark Horse Comics on social media for more news, announcements, and updates!

Praise for He-Man & Masters of the Multiverse by Tim Seeley:

“Whether you’re a fan of all things He-Man or only have love for the 80’s Filmation cartoon, the inside baseball nature of the story doesn’t flaunt its knowledge in the reader’s face to prove a point. It uses that information to craft an exciting story that all MOTU fans will thoroughly enjoy.” –Forces of Geek

“Masters of the Multiverse #1 is a sharply written and skillfully drawn return to the world of He-Man, with plenty of new twists and old references.” –Monkeys Fighting Robots

“This is a fun, engaging adventure that doesn’t get bogged down in treating the iterations of He-Man with kid gloves.” –Super Powered Fancast