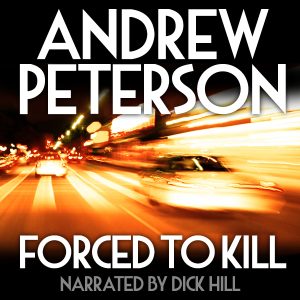 Bravery. Honor. Sacrifice. These are more than mere words to former Marine sniper Nathan McBride. He’s never backed away from danger, and he’s not about to start now, even if it means confronting the cold-blooded interrogator who tortured him to the brink of death more than a decade ago.

When a mutilated body is discovered in a remote Utah lake, it ignites a chain of events that forces Nathan to face a dark chapter from a past he’s worked hard to forget. Could his Nicaraguan enemy be active again? On American soil? The evidence is clear, but the stakes are higher than Nathan can know. In a showdown that will test Nathan’s understanding of justice and mercy, he’ll have to make a life or death decision that has the potential to expose and destroy people at the highest levels of government.

What are readers saying about Forced to Kill?

I have read an “advance” of this story and it is just as good, if not better than Peterson’s previous work, First to Kill. Now listening to Dick Hill read this sequel, he brings to life Nathan’s next adventure. Especially notable, Mr. Hill’s voice of the “bad guy” is not only eerie, but very believable. Cheers to Mr. Peterson for providing another fast pace and exciting story with memorable characters and a realistic plot!  Carla (Bradley, CA, United States)

And the award goes to… The Golden Globes are this Sunday, and 2021’s ballot is full of book adaptations! We invite you to pair your...
Read more