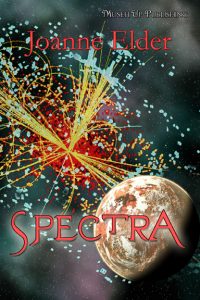 “After losing my father, I didn’t want to believe his journey was truly over.” Those were Joanne Elder’s words three years ago when she started searching for some sort of scientific evidence of the existence of the human soul. She began to research the human energy field and living inorganic plasma and what she found was compelling, thought provoking and comforting. Elder attributes much of her success as a debut author of Science Fiction Thriller, Spectra, to her late father. She shared his love of science fiction, and then followed in his professional footsteps earning a Master’s degree in Engineering Science, carrying on to work in both the aeronautical and nuclear industries. As an aspiring author, perhaps one of her biggest inspirations came from her father’s stories of the summers her grandfather spent with his cousin Lucy Maud Montgomery (author of Anne of Green Gables), on the Macneill farm in Cavendish, Prince Edward Island. Elder commented, “She was just a normal fun-loving girl who grew up to write herself to stardom, in an age where women’s accomplishments often went unrecognized.”

In Spectra, the first book in the Spectra series, a mining exploration crew makes an amazing discovery on a distant planet…intelligent life comprised entirely of energy. Living energy so pure and unique it could provide proof of the existence of the human soul. The crewmembers exposed to the entities become temporarily gifted with unimaginable cognitive abilities but at a terrible cost. One man’s obsession with his new found abilities leads to a domino of murder, betrayal, and ruthless slaughter of the peaceful entities.

Spectra would appeal to a wide audience. For the science fiction enthusiasts, the science is accurate where possible. Stephen King fans will revel in the darker aspects of the story and spiritualists will be left in awe. It’s a story that will capture the reader from the first page.

Spectra is dedicated to the author’s father, William Cavendish Macneill, and half her ebook royalties are being donated to Alzheimer’s research in his memory.

Joanne Elder is a member of the Professional Engineers of Ontario. She received her Bachelor’s and Master’s degrees in Engineering Science at the University of Western Ontario. During her professional career, she has published numerous technical papers.

Spectra was released July 1st with MuseItUp Publishing. For more information refer to www.museituppublishing.com or www.facebook.com/Spectra.Series

(BOOM! Press Release) Discover the Fate of the Iconic Slayer in a Shocking New Post-Apocalyptic Future in December 2021 BOOM! Studios, in collaboration with 20th Television,...