Rebel Magicians of the Urban Jungle

Magic marks are magic marks … they work whether or not you have permission to mark them. 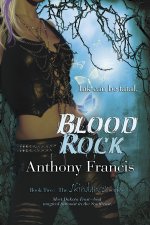 Hi, I’m Anthony Francis, author of FROST MOON and BLOOD ROCK, two urban fantasy novels featuring magical tattoo artist Dakota Frost. On Dakota’s first outing, she navigated a tightrope between magic and skepticism, facing off one tattoo artist who didn’t believe she could do magic … and a tattoo customer, a werewolf, desperate for her to ink a tattoo before the full moon. When I wroteFROST MOON, I had fun exploring all the different kinds of tattoo magic … but already, I had started to wonder: what other kinds of magic live in this alternate Atlanta where werewolves run in the night and vampires rule like gangsters?

In the sequel, BLOOD ROCK, I explored one new magical practice: magic graffiti. The basic premise of the Dakota Frost universe is that if magic is real, then magic is real – and would obey laws that characters could discover, with consequences that would be real, even they didn’t look anything at all like the laws and consequences of the physics of our world. In BLOOD ROCK, Dakota goes on a voyage of discovery bridging science and magic, where she’s forced to confront the realization that her scientific assumptions about the world may be not just wrong, but may always fall short of the full truth – and yet she must find enough of the truth to help her, her friends, and most importantly her child survive.

As an author, coming up with a magical system is part inspiration, part research – and part bookkeeping. I already knew from FROST MOON that magical tattoos were like circuits, storing up and dispensing the magical force mana based on the intent of the caster. But magical tattoos are powered by the life of their wearers; I had to invent a new source for BLOOD ROCK, a source Dakota would have to discover. More importantly, I wanted the story to tie in to both existing scienceAND existing mystical traditions, so I made sacred geometry and the golden ratio an important key to the puzzle.

But ultimately stories are about people in situations. The key relationship ofBLOOD ROCK is between Dakota and her adoptive daughter Cinnamon, a young weretiger Dakota is trying to rescue from life in the streets. I could have had Dakota learn what she needed to learn from a physicist at Georgia Tech – in fact, she does talk to one – but ultimately I decided that it should be Cinnamon who cracks the code. So the story of BLOOD ROCK hinges not upon quantum physics or magical theory, but something simpler, more human … a mother paying attention to her daughter’s homework.

I hope you enjoy your stay in BLOOD ROCK! Y’all come back alive, you hear?

Love’s Call by Fern Brady Two people from rival nations find themselves fighting against the growing attraction between them, but only one of them realizes...